You are here: Home / Archives for Appeals

Listed below, you will find those articles on the Moray Claims Blog which deal to some extent with the issue of appeals to higher courts in relation to personal injury claims in Scotland. 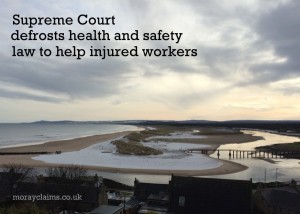 Imagine you're employed as a home carer in Scotland. Your work requires you to go out at all times of day and in all kinds of weather to provide personal care to the elderly, vulnerable and terminally-ill. One night in winter, with snow and ice lying on the ground, you slip and fall as you make your way to one of your client's homes. You break your wrist. The flat boots you were wearing had ridged soles but their grip was not enough to keep you upright. It turns out that crampon-like shoe attachments were available at reasonable cost and they would probably have prevented your fall if your employer had given you them to use. In other words, you can argue that your employer failed to take proper care for your safety, by failing to provide adequate personal protective equipment, so you have a right to claim compensation from them for your injuries and other losses. On the other hand, periodic sub-zero temperatures are a fact of life in northern Europe, aren't they? Anyone END_OF_DOCUMENT_TOKEN_TO_BE_REPLACED

The other day, I got an enquiry from a potential client about a tenancy deposit dispute. Having heard the details, I told him I didn’t think there would be any basis for making a claim. He wanted to continue to discuss the matter, so I had to tell him that I was not going to change my mind and, if he did not accept my advice, he should consider getting a second opinion from another solicitor. At that point, he told me that he had already spoken to several other firms of solicitors in Elgin about the same issue. So, I asked him what advice they had given him. He said: “The same advice that you have given me about it.” I smiled wryly as he said that and the call ended amicably. I had mixed feelings about it. Of course, I would like to feel that possible clients are coming to me with their enquiries as their “first choice” solicitor - which was clearly not the case here. More strongly, though, it struck me as ironic that several solicitors had all apparently END_OF_DOCUMENT_TOKEN_TO_BE_REPLACED