You are here: Home / Archives for Manual Handling

Often also referred to as "moving and handling", this class of Accidents at Work stems from the Manual Handling Operations Regulations 1992 - one of the sets of regulations brought into UK law from Europe. These are the articles on the Moray Claims website which deal with issues related to manual handling. 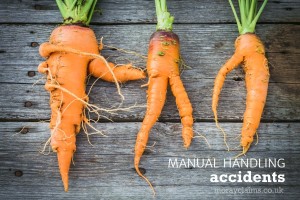 In rural California in the mid-1980s, Mike Yurosek had a problem which was common to all carrot farmers. More than half his crop was going to waste because it was considered too ‘ugly’ for retail. Carrots which were malformed, crooked or too large were written off as unsaleable and consigned to the bin. After some experimentation and some false-starts with different cutting implements, Yurosek settled on an industrial green-bean cutter, which cut the second-class carrots into regular 2-inch pieces. Unsure as to the reaction he would get, he sent a free bag of the alternative carrots with the usual delivery to one of his local retail clients. Next day, they called him to say that from then on they only wanted the new design of carrots. Yurosek had invented the ‘baby carrot’. In so doing, he lifted the carrot industry out of a rut. By 1987 – the year after his discovery – carrot consumption in the U.S. had risen by 30%. In the decade to 1997, carrot consumption doubled. END_OF_DOCUMENT_TOKEN_TO_BE_REPLACED