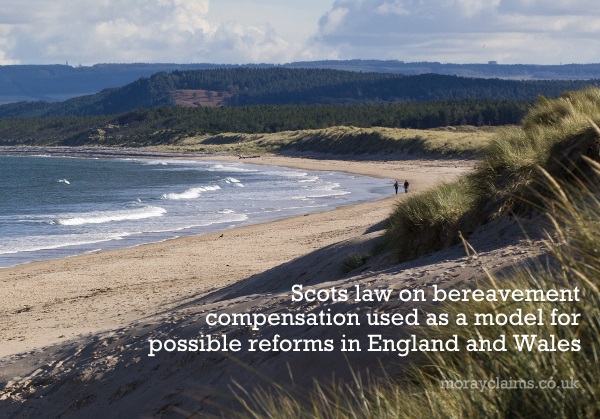 The Radio 4 consumer programme “You and Yours”, for 14 January 2016, included a section on bereavement damages.

It highlighted the fact that, although they say “you can’t put a price on a life”, in fact, we do it all the time.

Decisions made about which treatments and drugs are going to be available on the NHS are one example.

Another is the way we deal with compensation when someone dies as a result of negligence.

Scotland as a benchmark for law reform in England and Wales

One MP – a former personal injury lawyer – is asking for a change in the law to allow courts in England and Wales to pay more in compensation than at present and allow a wider range of relatives to claim, when someone has died as a result of negligence.

In many ways, the Scottish legal position is being used as the blueprint for the proposed change in the law in England and Wales.

Andy McDonald is the Labour MP for Middlesborough and his Private Member’s Bill comes before Parliament at the end of January 2016.

He explained that his proposed legislation for England and Wales covers deaths from personal injury caused by the negligence of another – so would include road traffic accidents and workplace accidents.

Currently, only the husband or wife or civil partner of the person who died – or the parents of children under 18 – can claim bereavement damages. Other relatives are excluded.

In England and Wales, the level of compensation is also capped at a fixed sum – currently £12,980. This figure is only a small proportion of the potential claim in similar cases in Scotland.

The programme carried an interview with a BBC producer whose 70-year-old father had died as a result of a cycing accident in central London.

He was struck from behind by a car, knocked off his bike and hospitalised with serious injuries from which he died 3 weeks later.

She would have been able to claim bereavement damages had the accident happened in Scotland but she was not eligible under English Law.

To reflect her father’s “pain and suffering” between the date of the accident and his death, his estate was entitled to damages of about £2,000. She said the total award was of the order of £20,000 and it included sums for:

She was asked what she thought of the law in England and Wales not allowing her a personal claim for bereavement damages and explained: “Well, I was quite peeved about it at the time because, as I understand it, if you are a child and not a spouse, there is no way of claiming this amount of money.”

“I thought, well, my Dad was very involved in my life. We were very close. He and I spent a lot of time together. He did a lot of things for me: from cooking to helping me with DIY around the house. The plan was always that, when I had children – he was a teacher and he was semi-retired – he would retire fully and look after my child.”

“There was no kind of recognition in the eyes of the law that I had lost this; no recognition that something – a major part of my life – had been taken away from me and no one would compensate me for that.”

Returning to Andy McDonald, MP, he said he hoped his new legislation would give rights in England and Wales to grandparents, siblings and persons who can demonstrate close family ties with the deceased (as is presently the case in Scotland).

He was challenged to justify these proposed changes to the law on the basis that they might open the gates to a flood of new claims, increasing pressure on insurance companies and thereby pushing up premiums.

Mr McDonald pointed out that negligence claims resulting from deaths are not commonplace. The general trend in numbers of fatal road traffic accidents and accidents at work is downwards. In any event, he said, nothing should prevent us doing the “decent humanely and civilised thing”.

Looking to the experience gained in Scotland, he said the sums paid out by way of compensation in fatal cases are not huge. Indeed, when the public was surveyed about levels of compensation, it indicated that the Scottish courts’ valuations were out of step with public opinion, as being too low.

His point was that, under the system he proposes, each case would depend on its own particular circumstances and there would be no “one size fits all” assessment of compensation levels. This would be a much fairer system, more in line with public expectations and more in line with the system already in place in Scotland.

Damages for the death of a relative in Scotland

Relatives are divided into two categories, for the purposes of claims. Members of a deceased’s “immediate family” include spouses, civil partners, cohabitees, parents, children, brothers and sisters, grandparents and grandchildren. They can claim bereavement damages – referred to as a claim for “distress, grief and loss of society” in Scotland.

They can also claim for loss of (financial) support and funeral expenses.

A broader group of relatives (including aunts, uncles, nephews and nieces), who are not able to claim bereavement damages in Scotland, can nevertheless make a claim for loss of support and funeral costs, where appropriate.

If you have any questions regarding the matters covered in this article (“Bereavement Damages – Scots Law used as a benchmark for reform”) or about any aspect of our personal injury claims services, please get in touch with us at our office in Elgin, Moray. All initial enquiries are without charge and there is no obligation to take matters further.

Fatal Accidents: Another Reason to Make a Will