You are here: Home / Avoiding Losing Money on Your Personal Injury Claim / Can You Get 100% Contributory Negligence? 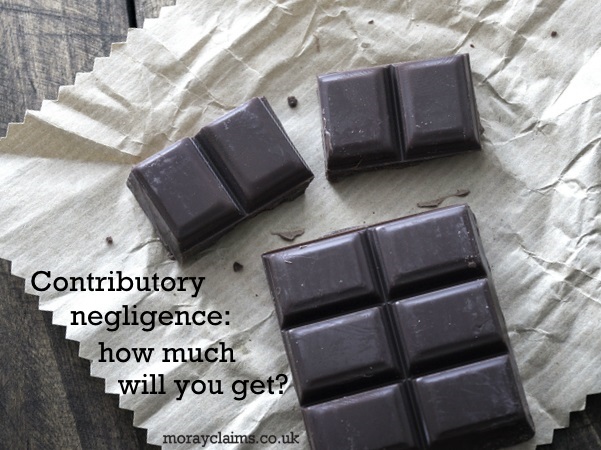 As a chocolate lover, my taste is more for milk chocolate and white chocolate than for dark chocolate.

If dark chocolate is married with another flavour, such as mint, I’m a big fan but, on its own, I’ll always prefer the other varieties of chocolate, if I can get them.

With 100% dark chocolate, it means that all the ingredients have come from the cocoa bean.

100% dark chocolate is not to everyone’s taste because of its intense bitterness.

In the world of personal injury claims, an area where ‘100%’ could leave an intensely bitter taste in your mouth is in relation to contributory negligence.

What is contributory negligence?

In the usual case, contributory negligence is where it’s accepted by the other party or their insurers that you should get some compensation for your losses. The catch is that they say it was partly due to your own fault that you got injured – so your full compensation should be reduced by a percentage to reflect your share of the blame.

In practice, deductions for contributory negligence tend to range from 10% to 90%.

A ‘typical’ deduction for contributory negligence (if there is such a thing), would be 20-25%.

If, say the bar of chocolate at the top of this post was your personal injury compensation. Of the 10 sections, the 4 broken-off bits represent your contributory negligence.  In that case, contrib been assessed at 40% and you are only receiving 60% of the full value of your claim.

Can you get 100% contributory negligence?

When contributory negligence used to always be 100% (in theory)

Before a change in the law in 1945, if you were partly to blame for your loss or injury, you received no compensation.

In practice, judges tried to minimise the effect of this rule. Where there were a number of causes of the damage, they looked at what was the predominant cause and rejected all the others.

By forcing judges to adopt an all or nothing approach to compensation, the law often produced unfair results for one side or the other.

The effect of the Law Reform (Contributory Negligence) Act 1945

Now in force for over 70 years, this legislation has withstood the test of time. Its effect was to allow judges to have regard to all the causes of injury or damage and apportion the compensation accordingly.

Section 1 of the Act says:

“Where any person suffers damage as the result partly of his own fault and partly of the fault of any other person … a claim in respect of that damage shall not be defeated by reason of the fault of the person suffering the damage, but the damages recoverable in respect thereof shall be reduced to such extent as the court thinks just and equitable having regard to the claimant’s share in the responsibility for the damage.”

A modern example of 100% contributory negligence

An English Court of Appeal case decided in 1984 made a finding of 100% contributory negligence against the claimant, Mr Jayes.

He was an experienced supervisor in the factory where he worked. There was a problem with a power press used to manufacture brass cartridge cases. Jayes called in 2 fitters to sort it out.

The machine needed lubrication. The fitters removed a guard on the machine to get access. Jayes used a piece of rag to try and stop grease getting onto other parts of the machine, as the fitters worked. He did this while the machine was turning over. Suddenly, the rag was dragged into the machine and Jayes’ right index finger with it, resulting in a serious injury.

Under cross-examination, Jayes had been asked: ““Would you agree with me what you did was a crazy thing to do, Mr. Jayes? His reply was: Yes, a very foolish thing to do.”

So he was frank that what he had done was a daft thing to have done in the circumstances.

But should it have been 100% contributory negligence?

A second look at 100% contributory negligence

In 1990, the Court of Appeal got the chance to consider the issue again in the case of Pitts –v- Hunt.

Pitts and Hunt were teenagers. They had been drinking together. Pitts was a pillion passenger on Hunt’s motorbike. Hunt did not have a licence. There was no insurance.

Pitts encouraged Hunt to drive recklessly. They were weaving in and out of the white lines down the middle of the road, whooping and shouting. They collided with an oncoming vehicle. Hunt was fatally injured and Pitts suffered life-changing injuries.

The claim failed, in any event, because they were deemed to have been involved in a joint criminal enterprise at the time. Though it was academic, the Court of Appeal also had to decide on contributory negligence: was it correct to say that Pitts was 100% to blame for his injuries? The court said ‘no’.

The court explained that 100% contributory was logically impossible and did so by analysing the wording of Section 1, above.

In the court’s view, if the claim had not already been extinguished by the ‘joint criminal enterprise’ element, Pitts and Hunt would have been found equally to blame for Pitts’ injuries – so Pitts’ contributory negligence would have been 50%.

If you have any questions arising from this article or about any aspect of our personal injury claims services generally, please get in touch with us. All enquiries are fee of charge and without obligation.

The following articles on this website deal with other aspects of contributory negligence and might be helpful to you: