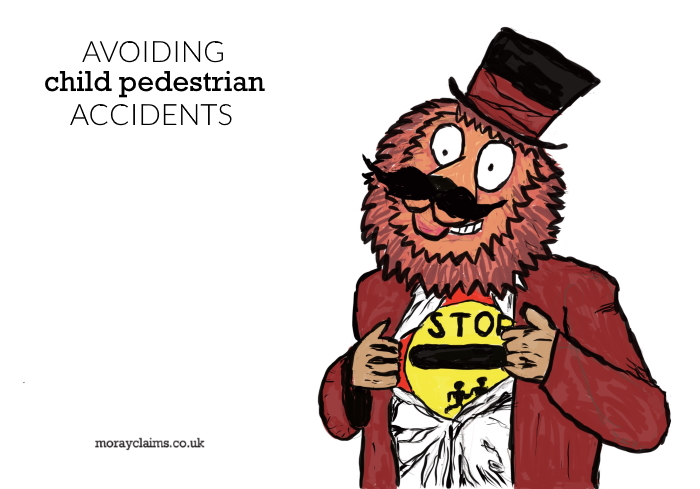 Meaning no more lollipop people to guide our children across the roads.

We have to hope that the publicity this controversial Council cutback has received will mean all drivers will take extra special care when in the vicinity of any Moray school.

In this article, we will consider 3 matters in relation to pedestrian road traffic accidents involving children. Firstly, we will consider the evidence about road safety measures such as school crossing patrols and why they provide useful benefits. We will then go on to look at the relative duties of drivers and child pedestrians and what scope there is for some of the blame falling on the injured child (contributory negligence). Finally, by means of an example, we will examine the issues that can arise along with contributory negligence, including possible shifting of blame onto a parent who has not taken proper care for their child’s safety (in letting them out alone onto the streets).

What are the benefits of school crossing patrols?

Ironically, 2011-2020 is the United Nations decade of action for road safety.

In 2011, Dorset County Council proposed similar cost-saving measures to the ones Moray Council have implemented.

A March 2011 Westminster parliamentary debate covered many of the powerful reasons why school crossing patrols are necessary.

Though these grounds for having lollipop people in place are a few years old now, the general picture is unlikely to have changed much.

In the UK, pedestrian injury is the leading cause of accidental death among children.

Each year, 5,000 children under 16 are seriously injured or die on Britain’s roads.

The injury rate for children peaks between 8:00am and 9:00am and again around 3:00pm when they are on their way to and from school.

Incidents on school-related journeys made up about:

Although – as at 2011 – the United Kingdom had the second lowest road death rate in the EU, its child pedestrian death rate was worse than in 10 other EU countries, and 8 times higher than in Sweden.

Research by Royal Holloway, University of London – published in November 2010 – concluded that primary school children are unable to accurately judge the speed of vehicles travelling at more than 20 miles per hour.

The study found that children aged six to 11 suffered from what was termed ‘speed illusion’. This meant that they could not reliably guess a vehicle’s speed if it was going at more than 20 miles per hour.

Adults, on the other hand, could accurately judge speeds of up to 50 miles per hour.

This youthful inability to judge vehicle speeds accurately is what makes the “stop and be guided across the road by an adult” system of school crossing patrols so valuable and crucial.

What are the relative duties of vehicle drivers and child pedestrians?

The law expects a very high standard of care of drivers in the presence of children.

With children, you have to expect that they will do the unexpected.

The fact of children’s unpredictable behaviour in the presence of traffic is recognised across the world. Here’s a road safety sign from Switzerland.

In the UK, a driver whose vehicle collides with a child will usually be to blame for the accident.

On the other hand, fairly recent UK court decisions have confirmed that children as young as 8 or 9 ought to know the basics of road safety. Contributory negligence can apply to a child of age 8/9 years old.

But each case will depend on its own circumstances.

For the third part of this article, we move onto a discussion of an actual case which included arguments about contributory negligence but also wider issues of possible parental blame and responsibility (even though the parent was not involved in the accident itself).

In this example, a boy of 8 was not found not to have contributed to his accident.

He was blameless. The accident was held to be entirely the fault of the car driver.

Caine Ellis was 8 years old when he was knocked down by a car close to his home in Birmingham in September 2008.

Caine suffered a brain injury which made it unlikely that he would ever be able to live independently.

The car driver accepted that his speed was over the limit of 30mph at the time (between 31 and 40mph). It was agreed that, if the car driver had been driving at 30mph, he would have been able to stop safely and avoid the collision.

On that basis, primary liability was accepted by the car driver’s insurers.

The issues for the court were (1) whether there was any contributory negligence on Caine’s part and (2) whether his mother, Violet Ellis, should bear any responsibility because she had allowed Caine to go out without adequate supervision.

Prior to the accident, Caine had been with 2 of his cousins – aged 10 and 11 – and it seems that, having become separated from them, Caine had gone to look for one of them in a local shop. Caine ran into the road in a diagonal direction, towards a zebra crossing. As he ran into the road, he was struck by the vehicle.

The court took the view that there was “no hard and fast rule” as to the age at which a young child could be found contributorily negligent. In judging the actions of a particular child, you had to look at what was reasonably to be expected of a child of the same age, intelligence and experience.

In the event, the court’s opinion was that Caine’s failure was a “momentary misjudgement”. His previous experience of Gospel Road was that it was a safe place to be. The court held that, despite the speed limit, a safe speed for cars was no more than 20mph. The car driver’s conduct was described as “reckless”, in the circumstances.

The court also found that Caine’s mother was a responsible parent who took proper care for her son:

No matter how careful a parent is, it is impossible for children to be completely protected from risk. Keeping children cooped up and not allowing them to experiment with small freedoms carries its own risk. There is a difficult balance to be struck. Different parents in different circumstances will make different decisions about how best to strike that balance. Sadly, when something goes catastrophically wrong, a parent may look back and agonise over the choice they made. The fact that, with hindsight, they would have taken a different course is very far from establishing that their original choice was wrong, still less that they were negligent.

School crossing patrols are principally necessary because children cannot judge vehicle speeds very well. It needs an adult to be there to make sure that traffic is stopped appropriately and safely.

Where a child is injured in a collision with a vehicle, contributory negligence will be theoretically possible in many cases but, in practice, the car driver will usually bear most of the blame, if not all the blame. As a car driver, you have to expect the unexpected with children. The speed limit should be seen as a maximum which, in order to be viewed by the law as “driving safely”, you should keep well below (in Caine’s case, 20mph was the “safe” speed, though 30mph was the speed limit).

Parents can – again, theoretically – end up in the dock if their child is injured by a car in circumstances where the child was not properly supervised. However, the courts accept that parenting is a difficult job. The reasonable range of decisions for parents to make – in relation to letting their children out into the world without parental supervision – is quite wide. The courts are reluctant to be minutely critical of decisions parents have made in good faith.

If you have a question about any matter raised in this article – or about any aspects of our personal injury claims services, generally – please contact us. Our aim is to help you, as an injured person in Moray, to claim fair and full compensation for personal injury in such a way that it costs you nothing, whether your claim succeeds or fails. All initial enquiries are without obligation and at no charge.