You are here: Home / Contributory Negligence / Failure to Wear a Cycle Helmet: Can You Still Claim for Injury? 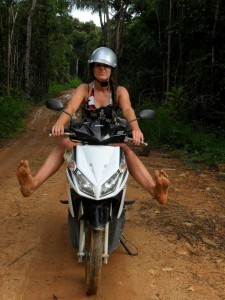 If you are involved in a road traffic accident while riding a bicycle, are you still eligible to make a claim for compensation if the accident was not your fault but you were not wearing a cycle helmet at the time?
The answer is very likely ‘yes, you can still claim successfully’.  The issue which arises is contributory negligence.

No Legal Requirement to Wear a Cycle Helmet

Unlike seatbelts in cars, there is no legal obligation to wear a cycle helmet.  In theory, this would not prevent a finding of contributory negligence in any event.  With seatbelt cases, the introduction of the legal requirement in the 1980s did not affect the various, fixed levels of contributory negligence that had been developed by the courts during the 1970s (and which still apply today).  However, there do not seem to be any reported decisions of the courts to date in which a cyclist has had his or her compensation reduced for contributory negligence due to failure to wear a cycle helmet.
The English Court of Appeal decision in Smith –v- Finch from 2009 illustrates judicial thinking in this area.

Contributory Negligence is a Possibility

Smith, a cyclist, collided with a motorcycle driven by Finch.  The court found the motorcyclist to blame for the accident but went on to consider whether contributory negligence applied.  It did not matter that the wearing of a cycle helmet was not a legal requirement.  In the court’s view, it was theoretically possible that lack of a cycle helmet might, in some circumstances, expose a cyclist to greater risk of injury in an accident.  This comment was made by analogy with the seatbelt cases.

The Science of Cycle Helmet Protection

There was scientific evidence available to the court that cycle helmets were only designed to provide protection up to 12 miles per hour and then only in certain circumstances.  In impacts at greater speeds than that, there was evidence that the helmet provided no effective protection at all.

In Smith, the court decided that the cyclist’s head probably hit the road surface at a greater speed than 12 mph.  This meant that the wearing of a cycle helmet would probably have made no difference to the severity of the injuries suffered.  Accordingly, there was no contributory negligence.

The court also reinforced the point that the onus was on the opponent – here, the motorcyclist – to prove contributory negligence.  It was up to them to produce scientific and medical evidence to support the allegation that the cyclist’s injuries would have been prevented or reduced by him wearing a helmet.  The cyclist’s claim was successful in full.

If you have been injured as a result of a cycling accident, please get in touch with us for free, without-obligation advice.  Complete the enquiry form by clicking HERE or contact Peter Brash via peter@grigor-young.co.uk or 01343 564813.  Remember that all initial enquiries are free of charge.