You are here: Home / Avoiding Accidents or Minimising their Effect / How Speed Affects the Outcome of Pedestrian Road Accident Collisions 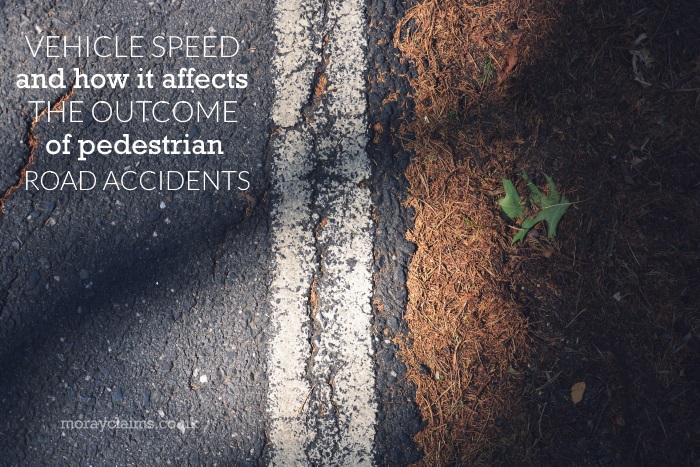 Escape velocity is the speed an object must reach to break the bonds of a planet’s gravitational force and get into orbit.

To enter orbit around the Earth, for example, a spacecraft needs to be going at a staggering 7 miles per second (25,000 miles per hour).

This creates a difficult series of connected problems. The vehicle requires a lot of fuel. Fuel adds weight. More weight means more thrust is required. Greater thrust demands more fuel. And so it goes on …

Another situation where speed has a crucial effect on the outcome is in relation to pedestrian road traffic accidents.

Frontal impact collision research has considered the effect of speed.

Research into road accidents involving pedestrians – carried out in the UK in the late 1970s – showed something you might consider to be obvious. For persons struck by the fronts of vehicles, the researchers’ findings demonstrated a strong correlation between vehicle speed at impact and severity of injury.

In other words, the higher the speed of the vehicle at impact, the more serious the injuries suffered by the struck pedestrian.

This is what you would expect. But the real interest lies in the detailed findings across the population viewed as a whole:

Significantly, at impact speeds above 35 mph, most of the pedestrians suffered fatal injuries.

Other factors apart from speed must also be taken into account.

It is not a uniform picture across all age groups, for example.

Age has an effect on injury severity. For the same impact conditions, an elderly pedestrian will probably suffer more serious injuries than a younger one.

We saw above how there are threshold speeds in pedestrian accidents where you get a transition from “mainly minor” to “mainly non-minor” injuries (15-20mph) and then from “mainly survivable” to “mainly fatal” (30-35mph). These thresholds are probably lower for the elderly and higher for children.

When you review these findings, you can understand the science behind pedestrian road safety.

This research has informed road safety campaigns such as “Kill Your Speed – Not a Child”. It has also led to the introduction of traffic calming measures and 20mph speed limits in urban areas.

In Moray, many primary schools are surrounded by 20 mph zones.

Of course, you can raise the objection that, in the end, each case is unique.

The survivability of an accident for a pedestrian may vary depending on which part of the person’s body is struck first. And, all other things being equal, your survival chances will be better if it’s a 2CV that collides with you rather than a 4×4.

But speed is probably the most important variable and it’s the one which has been studied most extensively.

The relationship between speed and injury severity has implications for personal injury claims.

Points which are important in this context include:

The case of Campbell -v- Osborne provides a practical example of the “serious injuries” threshold.

A 5-year-old girl suffered severe head injuries as a result of being struck by a car. The case was heard at Nottingham County Court in 1993. The judge decided that the driver was probably doing about 25 mph at impact.

In the court’s opinion, had the driver been paying proper attention, he could have slowed to less than 15mph by the point of collision.

Following the research findings above, the judge’s finding was that, at a speed below 15 mph, the child would probably have suffered only minor injuries. The driver was at fault, in causing the accident.

In this article, we have looked at how speed affects the outcome of pedestrian road accident collisions (from the pedestrian’s perspective).

Many studies have been conducted into the relationship between impact speed and a pedestrian’s risk of serious injury or death. The higher the speed, the greater the risk to the pedestrian.

The age of the pedestrian is also a factor which will influence how damaging a particular impact speed is likely to be.

Research has enabled us to identify threshold speeds for pedestrian collisions which will often mark the boundaries between negligible injury, minor injury, serious injury, and death.

We are at the opposite end of the speed / weight / size spectrum from the Saturn V rockets which took the first astronauts to the Moon but vehicle speed can be a matter of life and death whether you are crossing the road or blasting off into space.

If have any questions arising from this post, please feel free to get in touch with us. All initial enquiries are at no charge and without obligation. Our accredited specialist personal injury solicitors, Peter and Marie, can be contacted on 01343 544077 or by sending a Free Online Enquiry.