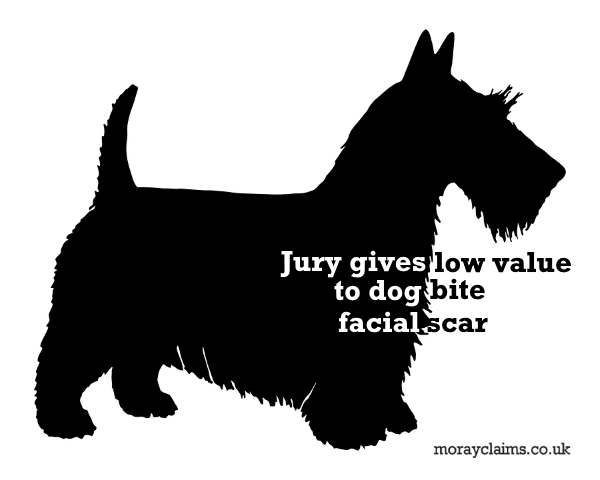 New Year’s Day in Scotland is a time when families get together to eat, drink and celebrate.

Margaret Ferguson went to such a gathering, at her brother-in-law’s house in Dundee, on 01 January 2011.

She ended the evening with a serious injury to her face: a full thickness laceration of the left side of her upper lip, extending to and involving the corner of her mouth. Over several months, she went on to need several surgical procedures. The injury left her with permanent scarring.

The cause of her injury was a bite by her brother-in-law’s Scottish Terrier, Dougal. The dog was nearly 10 years old and suffering from arthritis. As to Dougal’s character, he was “by all accounts, a very friendly good-natured little chap.”

So why did he bite Mrs Ferguson?

There was a dispute about the circumstances.

Mrs Ferguson’s version of events was that, while sitting on the sofa, she had turned round to speak to her husband. At that point, Dougal had suddenly jumped forward and attacked her.

Other evidence suggested, however, that Mrs Ferguson had said to the dog: “Wheesht you – give us a kiss”, before grabbing hold of the dog’s face and trying to kiss him. It was in response to this that Dougal had bitten her.

Mrs Ferguson raised an action for compensation in the Court of Session in Edinburgh. The claim was against her brother-in-law, as owner of the dog.

Under the Animals (Scotland) Act 1987, a bite from a dog automatically gives rise to a claim. You don’t need to prove negligence to succeed.

The claim was heard by a judge, sitting with a jury.  Jury trials in personal injury cases are only available in the Court of Session and the Sheriff Personal Injury Court (both based in Edinburgh).

From an injured person’s perspective, the main advantage of a jury trial is that the jury can award more for the “pain and suffering” (solatium) element of the claim than a judge deciding the case alone.

Judges must value injuries according to the parameters set down in previous decided cases. They have to be able to justify their decisions by reference to such case-law.

Juries, on the other hand, have to be given guidance about what the parameters are but, within reason, they are not restricted by that framework. The fact they can go “higher” or “lower” in awarding compensation for solatium means that jury valuations are unpredictable.

One type of situation where, traditionally, a jury trial has been a good bet is where the injured person is left with an obvious cosmetic defect. Amputated limbs and facial scarring are in this category.

Mrs Ferguson seemed to fit the bill as an ideal candidate for a jury trial.

The guidelines given to the jury

At the end of the trial, the judge heard the advocate for each side give their assessment of the fair value of Mrs Ferguson’s injuries claim.

The judge then gave guidance to the jury that the lower end of the scale for awards would be £10,000 and the upper end £40,000. That spectrum of values was only to assist the jury; it was not binding on them.

The range of values may seem wide, but lot of subjectivity comes into determining in how ‘bad’ a scar is and, therefore, how valuable it is.

The judge listed some factors that the jury might want to take into account in valuing the injury:

The jury valued the injury at £5,000. In other words, at less than the value suggested by Mrs Ferguson’s opponent.

Worse, it was also the jury’s view that there had been a significant amount of contributory negligence on the part of Mrs Ferguson.

They found that she was 85% to blame for her injury. She was only entitled to receive 15% of the assessed value of her claim.

This took the amount of her compensation down below £1,000.

Juries do not have to give reasons for their decisions. However, it seemed that they had attributed the overwhelming share of the blame to Mrs Ferguson not only in the percentage (85%) for contributory negligence but also in the low ‘100%’ value (£5,000) they gave to the injury.

Mrs Ferguson appealed the jury’s decision to three judges in the Inner House of the Court of Session.

She argued that the percentage for contributory negligence was unreasonably high and the valuation of the claim unreasonably low.

Giving their decision in August 2015, the judges rejected these arguments and confirmed the decision of the jury.

On the valuation point, the judges emphasised that the guideline figures were provided for assistance and were not binding on the jury. In the case of a laceration which left facial scarring, there was perhaps more of a subjective element for juries than with many other types of injury (e.g. broken bones).

Contributory negligence not too high

As regards contributory negligence, the judges pointed out that, when deciding how much to apply, you have to look at both “moral blameworthiness” and “causative potency”. In other words, in this case, balancing the relative positions of Dougal and Mrs Ferguson, how much was each morally to blame for causing the injury and how significant were the actions of each in causing the injury?

The problem with an animal injury for the purposes of contributory negligence is that it is strict liability. Moral blameworthiness is not taken into account as far as the animal is concerned.

The judges observed that, in a situation where there was a risk for Mrs Ferguson that she would be found morally to blame for her injury, the absence of moral blameworthiness as a permitted factor on Dougal’s side meant there was a real chance that contributory negligence could be skewed against her, as seems to have happened.

The fact that the jury award in Mrs. Ferguson’s case was appealed gives us an interesting insight into the probable thought processes of the jury in that case. We will never know exactly why they decided in the way they did, but the analysis by the Inner House is helpful.

If you have any questions about the various issues raised in this article – e.g.  jury trial risks, animal accidents, scarring – please get in touch with us.

Also, if you wish to make an enquiry about our personal injury claims services, generally.

All initial discussions are free of charge and without obligation.