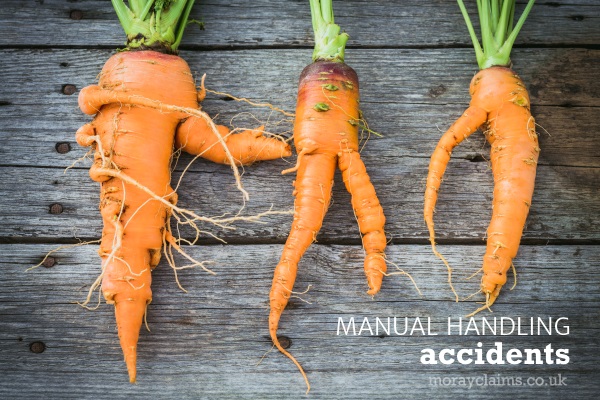 In rural California in the mid-1980s, Mike Yurosek had a problem which was common to all carrot farmers.

More than half his crop was going to waste because it was considered too ‘ugly’ for retail.

Carrots which were malformed, crooked or too large were written off as unsaleable and consigned to the bin.

After some experimentation and some false-starts with different cutting implements, Yurosek settled on an industrial green-bean cutter, which cut the second-class carrots into regular 2-inch pieces.

Unsure as to the reaction he would get, he sent a free bag of the alternative carrots with the usual delivery to one of his local retail clients. Next day, they called him to say that from then on they only wanted the new design of carrots.

Yurosek had invented the ‘baby carrot’. In so doing, he lifted the carrot industry out of a rut.

Hopeless cases had been transformed into something viable.

Prior to 1993, what we now call ‘manual handling’ claims were generally hopeless cases. Lawyers acted for workers who had suffered what were known as ‘lifting injuries’. As well as its obvious meaning, ‘lifting’ included carrying or moving loads. Legal protection was piecemeal across different industries and many workers had no protection at all. In practice, the weight of the load involved in the accident determined whether the claim was successful or not.

It was difficult to win a lifting injury claim

In some cases, you had to prove that the load in question was ‘so heavy as to be likely to cause injury’. One case from the 1960s ruled that a load of 145 pounds (about 65 kg) ‘was not likely to cause injury to a man of experience’. In another case from the same era, the claim by a man employed to lift lengths of chain, who had only one leg and a previous history of back problems, failed because he ‘had been told, whenever he wanted help, to get it’.

Things were no better by 1984. In that year, a paint sprayer with a back sprain sustained while loading a heavy circular aircraft engine component – weighing 192½lb (87 kg) – onto a turntable saw his claim fail, though the court accepted it was a ‘borderline’ case.

When you consider that a ‘heavy’ piece of airline luggage these days would be 25 kg or more, the courts seem to have assumed that all workers consistently displayed superhuman qualities when manual handling.

This is how it has been for much of health and safety law in the last 25 years or so. The Manual Handling Operations Regulations 1992 (‘MHOR’) implemented the 1990 directive for most of the UK, including Scotland.

Manual handling has a wide definition

It includes ‘any transporting or supporting of a load (including the lifting, putting down, pushing, pulling, carrying or moving thereof) by hand or by bodily force.’

The regulations provide a detailed framework for risk assessment, divided into various sections, with helpful questions to allow you to home in on possible concerns:

The onus is on the employer

If the employer cannot show that the ‘maximum risk reduction’ steps have been taken, an employee injured as a result of a manual handling accident will succeed with a personal injury claim if she can show that:

One example of a successful claim concerns an injury to a firefighter who was involved in erecting a large ladder, with colleagues, as part of a training drill. The ladder was caught by a gust of wind and he was injured. An ‘appropriate step’, which could have avoided the accident, would have been postponing the drill until the weather was more favourable.

This does not diminish the importance of MHOR, however. The courts have affirmed the continuing and fundamental importance of risk assessment in relation to questions of liability for personal injury. Regulations such as MHOR are still the first reference point for the standards employers must meet to fulfil their legal duties.

You can download as a PDF the ‘List of Factors’ relevant to manual handling risk assessment (81kB; download begins immediately). If you go through the tasks you have to do at work and find a lot of ‘yes’ answers to the various questions, it may indicate that your employer needs to look again at what they are doing to reduce the potential risks of injury from manual handling.

If you have any questions about this article or any aspect of our personal injury claims services, please get in touch. We are always glad to answer questions. You can contact Peter or Marie via 01343 544077 or by sending us a Free Online Enquiry.

If you live in Moray, our eBook Claiming Compensation for an Accident at Work in Moray could be a help, generally. You can find out more about it and download it free via this page in the Accidents at Work section of the Grigor & Young website (Moray Claims is a trading name of G&Y).