You are here: Home / Bus Accident / Pedestrians Hit By Buses On The Pavement 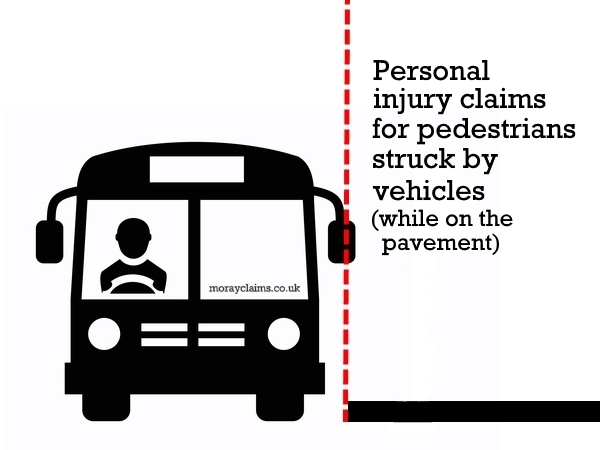 An accident which happened in East Road, Elgin, Moray, has resulted in a Court of Session action for personal injury compensation.

The Court of Session is the highest civil court in Scotland.

The decision of the court (2015) is a useful illustration of the principles which apply when you have an accident between a bus and a pedestrian who is on the pavement at the time.

The injured person, Ian Whyte, was a 10-year-old school boy at the time of the accident in 2008. He claimed against Bluebird Buses Limited for injuries he suffered when a bus struck him as he was standing on the edge of the kerb at the bus stop.

Several young people were jostling for position near the kerb, as the bus drew in to the stop. The evidence indicated that the collision was between the near side of the bus, towards the front, and the back of the boy’s head. The impact knocked him over. However, he managed to pick himself up and get home.

Much of the evidence in the case was derived from CCTV footage from within the bus. It appeared that the top half of the boy’s body was overhanging the road at the point of collision, though his feet were still on the kerb.

The court found the bus driver to be negligent, saying that even if a person is standing at the edge of the kerb, vehicles should not be driven in such a way as to hit them.

It was alleged that, in the event that the bus company were liable, there should be a deduction for contributory negligence. However, Mr Whyte was held not to have been contributorily negligent, in view of his young age at the time of the accident.

You might think that it would be obvious that a person struck by a vehicle, while the person is standing on the kerb, would have a successful claim.

Nevertheless, there have been several examples over the years of disputed claims where the injured person was on the kerb at the time they were struck by the vehicle.

In the case of Chapman –v- Post Office, from 1982, the claimant was struck by the wing mirror of a Royal Mail van while she was standing on the pavement of High Road, Tottenham, at a bus stop.

The first judge assessed contributory negligence at 50% – making the van driver and the pedestrian equally to blame for the accident. The pedestrian appealed and the appeal was allowed. The claimant was 100% successful.

One of the 20th century’s most famous judges, Lord Denning, Master of the Rolls, said:

‘It seems to me that the finding of the judge simply cannot stand. I see no reason why a person standing on the kerb is guilty of negligence at all: even if she leans out or has her back turned to the oncoming traffic. Even if she went an inch or two into the roadway, I cannot see that that would amount to negligence in the slightest. The very fact that a van driver hits with his wing mirror a lady standing legitimately on the kerbside means that he is at fault and she is not.’

Lord Denning always managed to express his opinions clearly and briefly. He gave the main opinion of the court in Chapman. The 96 words quoted above were part of a judgment which totalled only 451 words.

In 2014, another Scottish decision (McEwan –v- Lothian Buses plc) from the Court of Session concerned a pedestrian struck on the head by the wing mirror of a bus in Gorgie Road, Edinburgh, while he was walking on the pavement.

His claim was successful, with no reduction for contributory negligence.

The pedestrian had moved towards the kerb, as the bus pulled in, and the court decided that the bus driver ought to have anticipated that a pedestrian might move towards the kerb in those circumstances. The court said it was reasonably foreseeable that a pedestrian walking within about a metre of the edge of the pavement may, at any time, change direction and come to the edge of the pavement. The duty of the driver was to take reasonable care by driving at a speed, manner and position to avoid hitting a pedestrian with part of the bus encroaching over the pavement.

If you have any questions arising from this article, please do not hesitate to get in touch with us. All initial enquiries are free of charge and without obligation.

These articles on our website might also be useful to you, having links to buses and pavements: