You are here: Home / car accident / Whiplash Injury: UK Insurers Told By MPs To Sort Out Their Practices 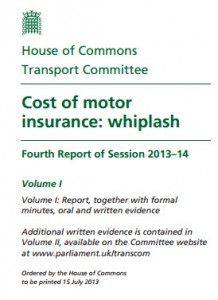 The Westminster Government’s perception is that there is an increasing number of whiplash personal injury claims following road traffic accidents – some of which are invented by the supposed victims and, even where genuinely-based, the extent of the injury is often exaggerated. In the Government’s eyes, this is pushing up the cost of motor insurance. The Government has described the UK as “the whiplash capital of the world”. The Select Committee considered these issues as part of its remit.

What is Whiplash and Why is it Problematic?

The definition for whiplash used by the Committee was: “The neck pain which occurs after the soft tissue in the spine has been stretched and strained when the body is thrown in a sudden, forceful jerk.” This is a typical result of the classic “rear end shunt” accident scenario.

There is no generally accepted objective test for whiplash injury. In common with back pain or headache, there are no physical features of the injury. It cannot be detected on x-ray or by CT scan or MRI scan. Given these factors, it is inevitable that opportunity for fraud and exaggeration arises.

The Chair of the Committee, Louise Ellman MP (Labour) said: “The Government has claimed that the UK is the ‘whiplash capital of the world’, but without reliable data on road accidents we cannot say whether that statement is true or not.”

Ms Ellman added: “Many claims are genuine and relate to real injuries which can affect people for months or years. In the debate about how to reduce fraud and exaggeration, genuine claimants should not be demonised simply because their condition cannot be picked up on a scan.”

MPs Tell Insurers to Get Their House in Order

The Committee considered that in some respects the practices of motor insurers were contributing to the problem or at least not helping it. MPs highlighted their surprise at the continuing practice of insurers in offering financial settlements to victims of road accidents – including alleged whiplash cases – without requiring provision of any medical evidence.

In addition, MPs were critical about the lack of openness on the part of motor insurers in making consumers aware of financial links the insurer might have with other organisations typically involved in road traffic accident claims – e.g. solicitors, vehicle repairers and credit hire firms. Consumers may be led to believe that such organisations are entirely independent of the insurers but financial incentives to refer business to particular companies may exist. MPs urged greater transparency so as to generate trust and confidence in the market.

We can help with advice if you have suffered a whiplash injury or any other injury as a result of a road accident. All enquiries are free of charge and without obligation. Contact us by phoning 01343 544077 or emailing peter@grigor-young.co.uk or by sending us a free online enquiry by clicking HERE and then completing and submitting the form. There are lots of ways to get in touch. If, by any chance, we are not able to help you ourselves, we will do our best to find someone who can.