You are here: Home / Avoiding Losing Money on Your Personal Injury Claim / Why fraudulent personal injury claims are not more likely to appear in Scotland than elsewhere 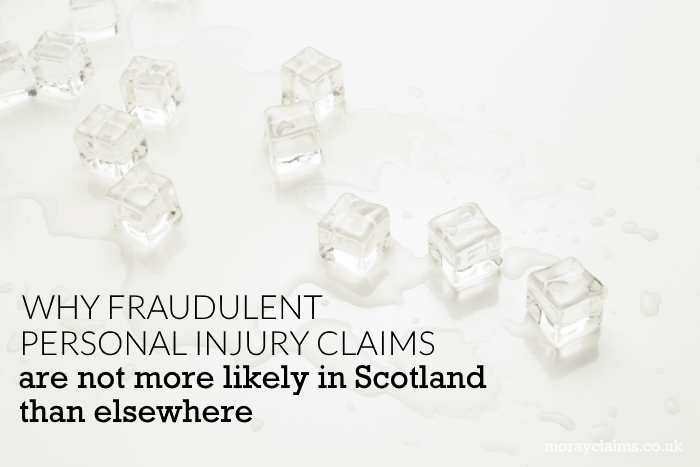 That was one description of 57-year-old New Jersey man Alexander Goldinsky’s apparent attempt to stage a “slipping on ice cubes” accident in his work canteen.

The incident – which happened sometime in the second half of 2018 – was captured on CCTV. Allegedly, he then filed a false insurance claim for the ambulance service and treatment he received at a local hospital for his “injuries” and the outcome was that he faced a criminal prosecution for fabricating the claim.

Clearly, the USA is not Scotland but did you know that…

…within the UK, Scottish personal injury claimants are most likely to put forward exaggerated or fraudulent claims?

This view has been expressed in the legal press by solicitors whose job it is represent the interests of insurers in defending personal injury compensation claims.

Reforms to the law in England and Wales have meant that, in some claims where the injured person has been found to be dishonest in some part of their claim, the whole claim has been disallowed.

In most of these cases, the accident was real. The person had been injured. Their wrongdoing was to make up part of the claim.

In one English case we have discussed previously, an injured claimant – who made up receipts for gardening services he said he needed due to his accident – had his whole claim dismissed. The value of this part of the claim was about 28% of the whole. However, he was deemed to have been “fundamentally dishonest” in relation to his claim and that invalidated the whole claim.

The law of “fundamental dishonesty” does not apply in Scotland.

For that reason, Scottish courts have not considered it appropriate to extinguish whole claims if only a part of it is found to have been put forward dishonestly.

One particular case has irritated the insurer commentators in this respect.

The problem is the Scottish case Court of Session case of Grubb –v- Finlay.

The accident giving rise to this claim for personal injury compensation had happened on 22 May 2011 at a petrol station in Dundee.

Mr Finlay had reversed his vehicle into the front of Mr Grubb’s stationary car.

Though it was a low velocity collision (estimated at 4 miles per hour), Mr Grubb claimed he had suffered injuries which left him with a host of ongoing unpleasant symptoms:

• Pain in his left shoulder;
• Shooting pains in his left arm;
• Altered sensation in the fingers of his left hand;
• Chronic pain and a (psychological) adjustment disorder;
• Insomnia;
• Incontinence.

He claimed £500,000 in the court summons which formed the basis of his claim in the Court of Session. But, as the case went on, the value seemed to get progressively less.

At one stage, the insurers for Mr Finlay had lodged a Minute of Tender for £30,000 but by the time of hearing on evidence it had been withdrawn. Accordingly, on one view, Mr Grubb had no option but to proceed to Proof.

Mr Grubb was successful in that the court awarded him “some” compensation?

Often, Scottish courts have awarded full or substantial expenses (costs) to successful claimants even though they have only been awarded a small fraction of the total sum they claimed.

Not so in this case, however.

The court has a wide discretion on expenses and, here, the claimant’s unreasonable behaviour – and “significant lack of candour” (in relation to some parts of his claim) – counted as the most important factor in the court’s eyes.

From the reports of the case, we don’t get to know how much the costs came to but – in the Court of Session – we can be confident it would have been tens of thousands of pounds.

Although Mr Grubb got an award of over £7,000, it would have been dwarfed by the award of expenses against him.

We don’t know what financial arrangement he had with his solicitors but this case would certainly not have been a “winner” from their point of view.

As the court pointed out, Mr Grubb was effectively required to pay 5/6ths of the cost of the action (3/6ths (or one half) being the costs on his own side, with the remainder (2/6ths) being what he had to pay of his opponent’s costs).

The commentators on behalf of the insurance industry have criticised what they see as a more lenient attitude among the Scottish judiciary compared to England and Wales.

The original decision of a single judge in this case was upheld by three judges on appeal. In their view:

“The pursuer did not make a fundamentally dishonest claim. He made a good, if exaggerated, claim.”

When you consider he sued for £500,000 and was awarded less than 2% of that sum, Mr Grubb achieved very limited success, verging on complete failure. Whether Mr Grubb’s claim should have been dismissed completely, with a full award of expenses against him (rather than him getting a small award of compensation but the expenses of the action awarded against him) could be argued to be academic.

If the insurers’ worry is that this sort of thing will encourage more exaggerated and fraudulent claims, it’s difficult to see how that will materialise.

In the end, it is solicitors’ willingness to take on claims which matters.

No one benefits from exaggerated or fraudulent claims, least of all the solicitors who rely on their expertise to pick claims that will succeed in providing compensation for their injured clients and remuneration for them so they can continue running a personal injury practice.

Solicitors acting for injured people seeking compensation do not want to – cannot afford to – back losing claims.

It’s a discussion for a separate article but you can take it that claimant personal injury solicitors have systems in place to try to weed out the claims where there may be problems with exaggeration or dishonesty – because, financially, there is nothing for the solicitor to gain in running such claims (and, as we have seen, there’s much to lose).

We hope this article has convinced you why fraudulent personal injury claims are not more likely to appear in Scotland than elsewhere, despite some arguments to the contrary. Our view is that we should put the suggestion that an “increased fraud claims environment” exists in Scotland “on ice” 🙂 .

If you have any questions about issues raised in this post – or about any aspects of our personal injury claims services, generally – please do get in touch. Remember that we aim to help injured people in Moray to claim fair and full compensation for personal injury in such a way that it costs you nothing whether your claim succeeds or fails. All initial enquiries are without obligation and at no charge.