You are here: Home / Avoiding Accidents or Minimising their Effect / Why Walking on National Speed Limit Roads during the Hours of Darkness is such a Bad Idea 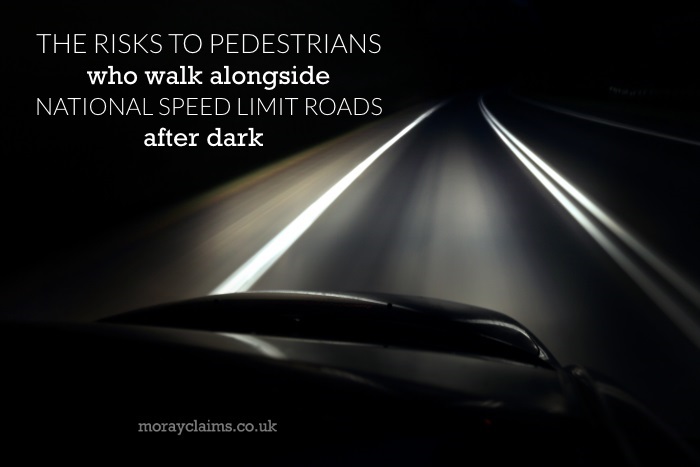 Most of us did this experiment in school Science class.

Using a 30cm ruler, one person holds it at the “30” mark and lets it hang down vertically. Their partner (person 2) puts the thumb and first finger of one hand at either side of the “0cm” mark on the ruler. Person 2’s fingers should almost touch the ruler, but not quite.

Without warning, person 1 lets go of the ruler. Person 2 tries to stop the ruler’s descent as quickly as they can, by closing their finger and thumb together.

You record the level (in cm), just above person 2’s finger, where the ruler was caught. You repeat the test five times and work out the average “catch distance” for the person.

As I recall, the experiment generated a lot of hilarity and messing about – and some (alleged) reaction time results (say, 0 – 30 milliseconds) that bordered on the clairvoyant.

What is the experiment meant to show?

The main things “Catch the ruler” shows as a school experiment are that:

Another area of life where paying attention is important is when you are driving.

You need to be ‘on the ball’ in case you have to react to an emergency situation. You try to minimise distractions as far as possible but many things which affect your concentration on the road ahead are outwith your control.

A pedestrian in the road is a possible reason for you having to stop suddenly. Darkness is a factor which can complicate driving, from an attention point of view.

In this article, we will look at the safety implications for drivers and pedestrians during the hours of darkness in relation to national speed limit roads which have no street lamps.

Firstly, we will see what the Highway Code says about walking on national speed limit roads at night. After that, we will consider what the Highway Code says about driver reaction times and vehicle stopping distances. Finally, we will examine how this compares with the results of research into pedestrian accidents and what you can do to improve your safety if you have to walk along or cross a NSL road at night.

Moray’s national speed limit (“NSL”) roads all have a maximum speed of 60mph.

We have some roads with crawler lane sections but no dual carriageways (where 70mph would be the speed limit).

Some NSL roads in Moray have separate pedestrian / cycle paths alongside. The roads between Elgin and Lossiemouth, and Forres and Findhorn, fall into this category. There are ongoing attempts to expand this system (e.g. discussions regarding a path to link Lossiemouth and Hopeman).

However, most NSL roads in Moray only have a single carriageway in each direction. Accordingly, pedestrians are forced to walk on the road, sharing it with fast-moving traffic.

What safety advice does the Highway Code give which is relevant to night-time pedestrians on unlit NSL roads?

Rule 3 advises you to “Help other road users to see you”. In poor daylight conditions you can do this by wearing or carrying something light-coloured, bright or fluorescent. In the dark, you need to make use of reflective materials. This can be in your clothing itself – e.g. jacket, waistcoat or footwear – or in an accessory such as a sash or armband. According to the Highway Code, reflective materials can be seen, by drivers using headlights, up to three times further away than non-reflective materials.

To be safe as a pedestrian, you need to be visible and drivers need to react to your presence appropriately and in time.

This is reflected in the “typical stopping distances” set out in the Highway Code. These have two components: thinking distance; and braking distance. The “thinking distance” is the time it takes your brain to perceive the hazard and translate that into hitting the brakes.

The problem is that 0.68s is not always a good estimate of a driver’s perception-reaction time.

Research has shown that, in some situations, drivers may react more quickly than the 0.68s “standard”. One example could be where a driver has seen a potential hazard, such as a pedestrian at the side of the road, some way off. If the driver has covered her brake as a precautionary measure, reaction time decreases. This is because the limb movement time from the accelerator to the brake is significantly reduced. In such a situation, a driver’s perception-reaction time is likely to be around 0.5s.

The overall picture from the research, however, is that average perception-reaction times of drivers are greater than 0.68s.

Some of the times are considerably higher than 0.68s.

A perception-reaction time of about 1 second may be a better estimate in relation to a driver encountering a situation such as a pedestrian dashing out into the road from behind a parked car directly in the driver’s field of view, when there is no other traffic about.

In traffic conditions where there is a lot going on, a driver has to monitor a number of potential hazards. As a result, she may not be looking directly towards the hazard which requires an emergency response. Here, the perception-reaction time may be between 1 and 1.5 seconds.

What happens when you add darkness to the mix?

It produces a situation where it may be difficult for a driver to perceive the hazard. As a result, the 1.5 seconds extends further still.

This could include the circumstance where a pedestrian in dark clothing is walking along, or crossing, an unlit road at night. We have seen opinions of road traffic accident reconstruction experts, expressing the view that, in such situations, a perception-reaction time of 2 seconds is possible.

Let’s go back to our “thinking distance” of 18m at 60mph, according to the Highway Code.

Increasing the perception-reaction time from 0.68 second to 2 seconds changes 18m to 53m (almost 3 times the distance).

53m is about 175 feet or 13 car lengths. And that’s just the time / distance it takes the driver to hit the brakes. You still have the “stopping distance” to take into account before you’ve actually come to a halt.

You might think this all seems unduly pessimistic in terms of assessing drivers’ ability to avoid objects (including pedestrians) on the road in the dark.

If so, some further “proof” in that respect might help convince you.

Paul Olson is a leading expert and author in this area.

His research confirms the startling conclusion that the majority of drivers travelling along an unlit NSL road (whether the speed limit is 60mph or 70mph) will be driving at a speed which does not enable them to stop within the distance they can see to be clear (using dipped-beam headlights) .

On Olson’s analysis, using a European vehicle with dipped headlights, for objects of low contrast viewed on roads where there is no street lighting, the maximum speed at which the vehicle can be driven for the driver to stop short of the point of impact is around 40 mph.

In real night-time driving conditions, however, the position can be even more complicated.

Any of the following additional factors might make even 40 mph an optimistic “safe-stopping speed”:

From the assessment above, you’ve got to wonder if it can ever be advisable to walk along the carriageway of an unlit NSL road during the hours of darkness. The risks are considerable.

As we have considered in another article, if a vehicle strikes you at a speed of 35 mph or more, it will probably cause you fatal injuries.

If you have to cross such a road during the hours of darkness, the best policy is to regard yourself as “invisible” to drivers and take extreme care, accordingly.

Few people would choose to walk along the carriageway of an unlit NSL road during the hours of darkness.

Often, the need to do that will be unexpected or unplanned. Maybe you’ve missed your lift and don’t have the money for a taxi. You likely won’t have high-viz gear with you; you’ll probably have to make do with the dark, non-reflective clothing you have on.

If you’ve taken some alcohol, that may encourage you to think you’re in less danger than you are. But even if you’re in a sober condition, unless you’ve considered the research findings we’ve discussed above, you’d probably underestimate just how very dangerous it is to put yourself in that position as a pedestrian.

If you have any questions about anything arising from this article, please feel free to get in touch with us. All enquiries are at no charge and without obligation. You can contact our specialist, accredited solicitors – Marie and Peter – by phoning 01343 544077 or by sending us a Free Online Enquiry.

We produced this article because of our concern that the public perception of the safety of a pedestrian walking on an unlit NSL fails properly to take into account what the always-developing  science of road traffic accident reconstruction shows about the true (i.e. very great) risks to pedestrians. We wanted people to understand why walking on national speed limit roads during the hours of darkness is such a bad idea. We would like to acknowledge the help we have derived from the knowledge base of the Association of Personal Injury Lawyers and from explanation and analysis (in lectures and expert reports) by one of the world’s leading experts in this area, Peter Sorton (not that they are aware of having helped us in this way).