You are here: Home / FAQs / How a Criminal Conviction helps with a Personal Injury Claim 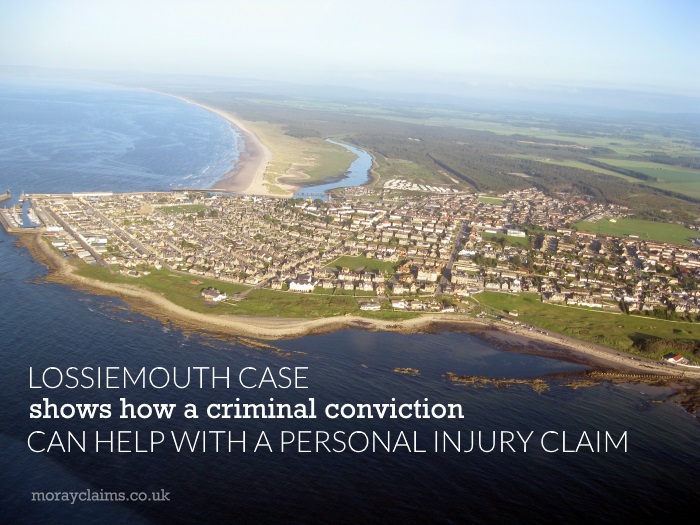 This is a procedural decision from the All-Scotland Personal Injury Court in Edinburgh.

In this article we will consider three aspects of how a criminal conviction helps with a personal injury claim.

1. The use of criminal convictions in civil proceedings.

It is a general principle in the law that prior inconsistent statements should be allowed as evidence. If someone now insists that a particular version of events is the case but it can be shown that they have previously asserted something different, even the opposite, that will affect the believability of their story. It might even undermine their credibility completely.

The standard of proof is higher in criminal cases than in civil cases.

In criminal situations, you have to prove things beyond reasonable doubt; in civil cases the standard is the balance of probabilities. In criminal cases, you need something quite close to certainty but in civil cases the question is whether something was more likely than not (i.e. more than 50% likely). If someone has pled guilty or been found guilty to the criminal standard, on the face of it, that is way beyond what would be required in a civil case.

Legislation enacted in 1968 brought in a provision whereby, in any civil proceedings in which satisfactory vouching of a person’s criminal conviction is provided, the person shall be taken to have committed that offence unless the contrary is proved.

In civil proceedings, the burden is on the person with the conviction to prove that, in spite of that conviction, they did not do what is alleged.

The ‘classic’ situation where a criminal conviction is used to establish liability in civil proceedings for personal injury compensation is where the driver who is alleged to have been negligent has a conviction for some form of driving offence – such as careless driving or dangerous driving – arising out of the incident.

The claimant’s solicitor would usually prove the relevant conviction by obtaining an extract copy from the sheriff clerk of the court where the criminal case was heard. It can also be important to get a copy of the summary complaint or other originating document so it is clear that the background circumstances are relevant to the civil proceedings. The extract conviction will usually only state the fact of conviction, any relevant statutory provision and the penalty imposed. It will not mention the registration numbers of any vehicles involved and the names of any third parties who are said to have been affected or injured by the incident.

As reported on the Scottish Courts website, in this case the injured person alleged that he had been immediately outside the pizza shop in the Branderburgh part of the town.

There was some sort of altercation between him and another customer of the shop who was inside the shop at the time. The glass entry door was between them. The customer who was inside punched through the glass window of the door of the premises with the result that the claimant (outside) was showered with glass. He suffered an eye injury which left him with permanent impairment to his sight.

The punch led to a criminal prosecution for culpably and recklessly punching through the glass, with a total disregard for the consequences.

This was charged on indictment which is the most serious level of criminal prosecution in the Sheriff Court. The alleged wrongdoer had pled guilty to that charge; he did not take the matter to trial.

As there were issues about whether the door in question should have had safety glass in it, the man who had punched through the glass argued that his conviction, of itself, could not establish liability on his part. His argument was that the blame for the accident lay with the proprietor of the shop. If safety glass had been in place, it would not have been possible for the claimant to be injured.

The court disagreed. The sheriff granted the claimant’s request to find in his favour on liability. The result was to restrict the disputed issues to the value of the claim and the question whether and to what extent there should be any sharing of liability between the customer (the one who punched through the window) and the proprietor of the shop.

The sheriff said: ‘Having scrutinised the pleadings and considered the other material available, it does not seem to me that the defender has demonstrated any realistic prospect of discharging the onus of proof imposed upon him’ to prove that he did not commit that offence.

So, the criminal conviction was a powerful piece of evidence for the claimant in the circumstances.

Are there ever circumstances in which an alleged wrongdoer will be able to overcome the burden of proving in civil proceedings that, in spite of a criminal conviction, they did not commit the offence?

3. Proving in a civil case that you did not commit the offence covered by a criminal conviction.

The case of Mackenzie v Mackay – from the Court of Session in 1989 – arose from a collision between a motorcycle and a car at Melvich in Sutherland.

The injured motorcyclist claimed compensation for multiple injuries which had left him at a permanent disadvantage on the labour market. He alleged that the other driver had been on the wrong side of the road at the time of the accident. However, he had been prosecuted for careless driving and found guilty after a trial at Dornoch Sheriff Court.

Could he get over the hurdle presented by his conviction and nevertheless claim successfully?

By the time of Court of Session hearing, the elderly car driver had died. There were no reliable independent witnesses to the accident itself. In reaching his decision to award compensation, the judge placed a lot of weight on comments made by the claimant to the first civilian rescuers who came upon the scene in the immediate aftermath. “Tell my mother it wasn’t my fault”, he said, and “Oh! That car was on the wrong side of the road”. The car had also just passed from a two-lane section to single track road and it seemed likely that the driver had not adjusted her road position in time.

Despite objections on behalf of the car driver, the court accepted evidence of what had happened at the criminal trial. (So note that, in this case, the convicted motorcyclist had always disputed his guilt and gone to trial, unlike the Lossiemouth pizza shop customer who – in response to the criminal prosecution – had accepted his guilt).

Here, though, things veer off into the surreal.

The judge decided that the sheriff who heard the criminal trial had not found the motorcyclist guilty by “judicial means”. The sheriff’s hectoring behaviour towards the claimant during the trial had been witnessed by two solicitors who were watching the trial for some holiday entertainment. Accosting them later within the court building, the sheriff had made comments to the holidaymakers which could be interpreted as demonstrating explicit bias against the motorcyclist.

In the unusual circumstances of this case, the judge considered that the claimant had done more than enough to overcome the negative evidence of the conviction. The motorcyclist’s claim for personal injury compensation was 100% successful.

If you have any questions arising out of this article about how a criminal conviction helps with a personal injury claim (which is a type of civil claim), please do not hesitate to get in touch with us. We are keen to explain things clearly but the solicitor’s tendency to legalese can be difficult to shake off. Your questions help us improve and expand the content on this website.

You can contact Marie or Peter on 01343 544077 or you can send us a Free Online Enquiry. All initial enquiries are at no charge and without obligation.