You are here: Home / Avoiding Losing Money on Your Personal Injury Claim / Should you accept the insurers’ first offer? 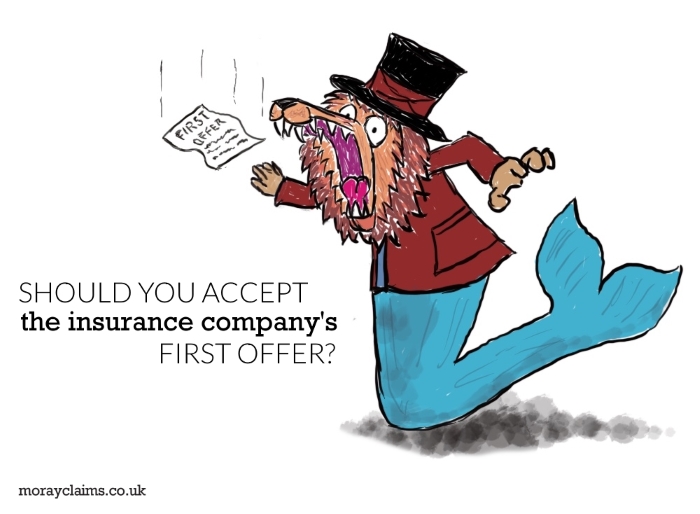 Sylvester Stallone’s big break as a movie star came with the 1976 film, Rocky.

However, his own story is as inspirational as that of the boxer he played on screen.

Stallone had a troubled upbringing, spending a lot of time in foster care. In his 20s, at one point, he was so hard up that he had to sell his dog.

He wrote the first draft of Rocky after watching a boxing match in which an unknown and unfancied fighter lasted a full 15 rounds against world champion, Muhammad Ali.

Film studios were very interested in the script but not with Stallone in the starring role. Nevertheless, he held out. Even when one studio offered him $325,000 for the script alone – at that time, the highest amount ever offered for a script – he did not waver.

In the end, he got his wish. The purchase price for the script was only $35,000 (and the movie was reduced to a low budget production) but Stallone got the lead role.

Rocky was a massive hit, winning an Oscar for best picture – and Stallone became a star.

Sylvester Stallone saw the benefits of his endurance and perseverance.

In the face of the offer he’d received for the Rocky script alone, the deal he accepted must have seemed crazy to others at the time. And yet – with the huge success of the film – it all paid off in the end. And there are parallels here with personal injury claims. Any offer you receive in settlement of your claim may not be your opponent’s “best offer”.

But will you be able to hold out for a better offer?

Should you hold out?

In Scotland, most claims close to settlement are valued by the injured person’s representative, first of all. Sometimes, the insurer may make the first offer – especially if it is a pre-medical offer – but usually the insurer is responding to an offer put forward on your behalf.

If they agree with the offer you have made, that’s the claim settled without any haggling. But what if – as usually happens – they propose settlement at a lower amount?

In this article, we will consider 3 matters related to the question: should you accept the insurers’ first offer?

Firstly, we’ll consider the relative bargaining power of each side in this situation. Secondly, we’ll look at what statistics are available about the numbers of people who get beyond the insurers’ first offer to settle their personal injury claim. Thirdly, we’ll discuss some of the factors that might affect your ability to hold out for a higher offer.

1. The negotiating strengths and weaknesses on each side.

It’s not a level playing field.

Though your personal injury claim may appear to be against an individual or a company, in most situations, it’s an insurance company on the other side. Most claims are in circumstances where insurance is compulsory – e.g. road traffic accidents (motor insurance) or accidents at work (employers’ liability insurance).

You’ve got a “one-shotter” accident victim claiming against a “repeat player” insurer.

The insurer can take a “long view” by grouping similar types of cases together. A tactic may succeed in one case and not in another but, overall, the insurer can spread the risk over several cases. On the other hand, as the injured person, you’ll be acutely aware that you only have this one chance at “success”. A settlement offer by the insurer might be the largest amount of offer you’ve ever directly encountered in your life – even though it’s compensation you need rather than an unexpected windfall you can treat as a luxury.

The risk to you, if you’re too gung-ho – pressing your case to the limit in refusing offers of settlement – is that you could end up being penalised and having to pay the legal costs of your opponent. This is something we have discussed elsewhere in relation to Minutes of Tender. It could substantially reduce the amount of compensation you receive in your hands.

In the face of such risks, as the injured party, you’re likely to opt for a conservative and careful approach to any offers that might come your way.

2. Evidence of injury victims’ behaviour and approach to settlement offers.

The inequality of arms on each side means the injured person is likely to feel much more pressure in considering whether to accept an offer than the “risk neutral” insurer feels in making the offer.

We know of a couple of studies that have looked at claimants’ eagerness to accept settlement offers.

One study – from 1984 – found that two thirds (67%) of claimants accepted the insurer’s first offer.

This seems to run very much counter to the idea that personal injury claim negotiation is a series of offers and counter-offers (a pattern we have provided a case study example about in another article).

However, a study published in 2002 (link to PDF download) showed much more evidence of haggling.

It found that 90% or more of cases were settled after three offers or less. It was usually enough for there to be an offer, a counter-offer and there then to be a compromise at a middle-ground figure, within an acceptable range. In contrast to the 1984 research, only about one third (33%) of cases settled after one offer, rising to almost two thirds (67%) after two offers (and 90% after three offers).

3. What are some of the factors and tactics in play in relation to settlement offers?

Research and claims experience highlight a variety of factors that could weaken your ability to refuse a particular settlement offer. Some of these are obvious but not all of them.

Now, it’s time for a summary.

When you look at the landscape and see that the field of play (and the risk) is tilted in favour of the insurers, you can see why the pressure on the injured person is always a bit more than on the insurer where settlement offers are concerned.

Each case depends on its own facts and circumstances in the end, but the statistics show that a significant minority of first offers from insurers are accepted – even though “best advice” would be to hold out for (probably) a higher settlement.

Various things will affect your stamina in the face of a settlement offer. Chief among these is how well your financial position is holding up.

How badly do you need the settlement money?

In making your decision, it’s worth remembering Sylvester Stallone’s explanation of why he held out for what he considered to be a better offer for Rocky: “I knew that, if I took the money, I’d regret it for the rest of my life.”

This article was titled “Should you accept the insurers’ first offer?” (Answer: probably not) and we hope you found the discussion around that question interesting and useful.

If you’ve any further questions on this topic, please get in touch and ask us. Likewise, if you have any questions about our personal injury claims services, generally. We’d be glad to hear from you.