You are here: Home / Archives for Minute of Tender 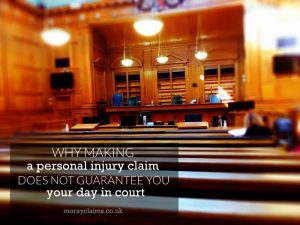 Can you have your day in court, with a personal claim, if that's what you want? Donald Trump used the Rolling Stones’ recording of their 1969 song “You Can't Always Get What You Want" during his 2016 primary and presidential campaigns. Following the Republican National Convention in July 2016, which was widely televised, the Stones went public with their views on the use of the song composed by Keith Richards and Mick Jagger. They stated that they did not endorse Trump. They also requested that Trump should stop using their songs to support his message. Despite these requests, Trump continued his use of the song at rallies, even beyond the 2016 presidential elections. It seems that, even if you are the Rolling Stones, you can’t always get what you want. It is also the case that, if you are an injured person with a personal injury compensation claim, you can’t always get what you want – and we’re going to look at some aspects of that in this article. Most people ask if they END_OF_DOCUMENT_TOKEN_TO_BE_REPLACED 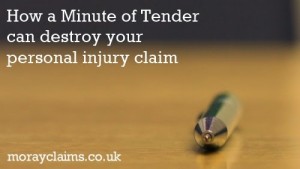 A Minute of Tender can be an effective weapon in a Scottish personal injury court action  A Minute of Tender is a device used in Scottish personal injury court actions which can undermine – and, at worst, destroy - your claim for compensation. For that reason, it is worthwhile understanding how Minutes of Tender work. So, firstly, we need to go back a bit – to before the court action. When will you need a court action? If your personal injury claim cannot be settled by negotiation, you will have to raise a court action. Generally, for that to happen, your solicitor will have to assess that your claim has a better than 50/50 chance of success. In the worst case, the dispute will be about whether you should get any compensation at all. A less serious problem is where it is just the value of the claim which cannot be agreed. In other words, there is agreement that some compensation should be paid but the opposing insurers are not offering a reasonable amount. How END_OF_DOCUMENT_TOKEN_TO_BE_REPLACED