You are here: Home / Road Traffic Accidents / When can you claim for the loss in value of a repaired car? 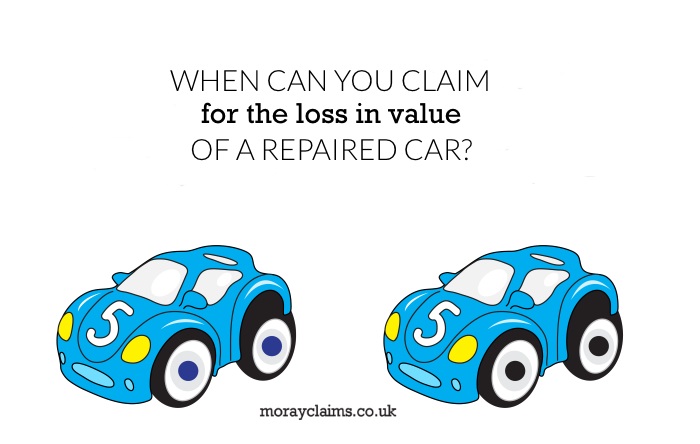 Where there is a personal injury claim arising out of a road traffic accident, there is often a claim for damage to a car as well.

As we have discussed elsewhere, claims for damage to vehicles will be valued on the basis of the lower of:

Another way of putting it is to say that, if the cost of repairing your vehicle will be “too high” relative to its value, the maximum you will get for it will be its net pre-accident value.

What if your car was very new when it was damaged?

In that case, while it may be economical to repair the vehicle, you might well feel that your repaired vehicle – even if it has been very well repaired – has lost value compared to what it would have been worth for resale if it had not been in an accident at all.

It’s an interesting question: whether the owner of a car which is damaged in a road traffic accident can claim as compensation not only the cost of repairing the car but also the loss of value to the car which is caused by the fact that it has been repaired.

Another way to look at it would be to consider two identical motor vehicles being offered for sale in a car showroom. One of them had been involved in an accident and the other had not. Wouldn’t a prospective purchaser obviously prefer to purchase the vehicle that had not been involved in the accident? That would be the case unless some financial incentive was offered – say, a discount on the price of the previously-damaged vehicle.

The issue of “diminution in value” is one which the courts have considered over many years.

The first time was in the English case of Payton –v- Brooks from 1974.

In that case, the claimant sought compensation of £100 for the reduced value of his car. This was on the basis that, although it had been repaired to a very high standard after a collision with the third party’s vehicle, its market value had been reduced.

His claim failed but that was because, on the evidence, he failed to prove any actual reduction in market value. In the Court of Appeal, the judges’ views were that, in principle, this was a valid type of claim and, with the right quality of evidence, the claim would succeed.

The 1990 Sheriff Court case of Hewer –v- Brown confirmed the applicability of the principle in Scotland.

In that case, a Porsche was damaged in an accident.

The owner claimed the loss on the sale of the Porsche. He claimed he had received a lower price for it – due to it having been damaged and repaired (even though it was to an excellent standard) – than he would have received if he had been able to sell it in its pre-accident condition.

The court was not deciding the merits of the dispute at that time – just whether, as a matter of principle, such a claim for loss in value could legitimately be made. The claim was held to be valid, if the loss could be proved.

What if you have a loss in value but no intention of selling the car?

The argument here runs as follows:

It’s all very well to allow a claim on a repaired car which is sold at a loss but can it be reasonable to claim if you have not sold the car yet? You might eventually sell it – after years, say – for scrap. In that case, the result would be that an award for the level of loss shortly after the accident would over-compensate the car owner. It would be a windfall benefit.

The case of Hunter v National Specialist Steeplejacks, decided in 2003, dealt with that issue and – surprisingly, you might think – found in favour of the car owner.

In Hunter, the car was a Renault Mégane Expression Coupé 1.4. It was manufactured in April 2001. It had done an average mileage by the time it was damaged in a road traffic accident in February 2002. The main claim was for the cost of the repairs (which was accepted) but there was an additional £1,443.75 claimed.

The extra amount was to reflect the fact that the vehicle had been reduced in value even although it had been repaired. It was argued that the repairs might deter potential buyers of the vehicle, should Hunter decide to sell it.

So any future sale of the car was at a date still to be determined – it was hypothetical. The car might never be sold on the open market at all.

On one view, the decision here is of relatively low authority – a Sheriff Principal deciding an appeal from the Sheriff. On the other hand, Sheriff Principal MacPhail wrote the book that is the “bible” of Sheriff Court Practice for Scottish solicitors. In addition, counsel for Hunter was Stephen Woolman, now Lord Woolman in the Court of Session.

Why did the claim for diminution succeed where no resale had taken place yet?

Sheriff Principal MacPhail took the view that it was “undeniable that the difference between the value of the car before the accident and its value after the repairs is a loss to” Hunter.

He also said that what Hunter may or may not do with the car after it had been repaired (i.e. sell or not sell) was not something he had to justify to the third party who caused the accident. Whether he subsequently sold the car in five years’ or 10 years’ time, or gave it away, or kept it until it could be sold only for scrap, the claimable loss was the reduction in value just after repairs were completed.

How will this work in practice?

You’ll need a motor assessor/engineer’s report to provide the basis for your argument; a loss of this type will probably not be regarded as “self-evident”.

It’s going to be an easier argument to justify, if your car was relatively new at the time of the accident. Note that, in Hunter’s case, the car was less than one year old at the time it was damaged.

We have seen a “rule of thumb” discussed whereby significant damage to a vehicle within the first year after manufacture will attract a diminution claim of up to 15% of value, within the second year up to 10% and within the third year up to 5% – with nothing after that, unless it is a prestige or vintage vehicle.

We have looked at the question: when can you claim for the loss in value of a repaired car?

If you have any queries about this article, please contact us. You send us a Free Online Enquiry or call us on 01343 544077. All initial enquiries are free of charge and without obligation.