You are here: Home / Compensation Culture / 5 Reasons Why People In Moray Decide To Claim For Personal Injury 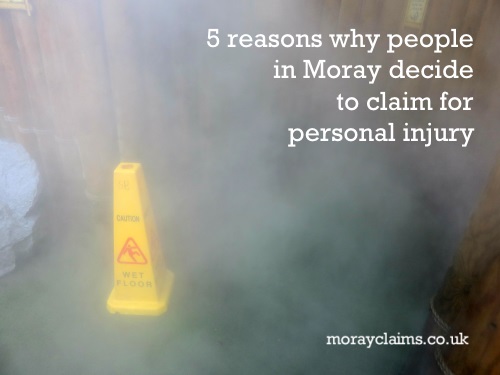 Our Personal Injury solicitors, Marie and Peter, have been handling claims on behalf of people in Moray for quite a few years now.

Of the clients we have helped, probably none relished the prospect of making a compensation claim.

Many had some sort of “objection” or problem in their minds, which they had to overcome before deciding to go ahead.

The cynical “Compensation Culture” view is that it’s all about getting money.

It has to be partly about money because that’s how the law of personal injury works but, in our experience, it’s not the whole story by any means.

We’ve collected comments from injured people we have helped in Moray and this article sets out some of the most common motivating factors behind their claims.

As you will see, some of the themes overlap a bit. Here are 5 reasons why people in Moray decide to claim for personal injury losses.

You incur significant loss of earnings

If you’ve been injured and have to take time off work in order to recover, you may not receive full wages during your absence.

While you may be paid in full to begin with, even the best sick pay schemes tend to cut you down to half pay and eventually nil, over time.

“Because you’ve now got ill health due to the accident, with hospital appointments, time off work and all of that, you start to realise that it is actually really expensive to be ill.”

The issue can become even more thorny where the accident was at work and apparently due to the injured person’s own employer’s breach of duty. Your employer injures you, so you can’t work, and then makes things even worse by not paying you while you are off sick.

“All that I wanted to do was claim my loss of wages. If they had even just given me my wages, I would have gone away happy but all they gave me was statutory sick pay.”

“If they had paid me when I was off my work, I wouldn’t have bothered. But when I realised I was losing my wages – I lost five or six weeks’ wages – we had to use our own money to subsidise us. I had been speaking to my wife about it. I said that I didn’t know what to do here. She said it was up to me and did I just want to forget about it. I said to her: “Look at how much money we have lost. We have had to use our own money.”

It’s one thing to suffer injury but to lose out financially and have to dip into your savings, perhaps using them all up in the process, is much worse.

It leaves you feeling vulnerable in the face of any further financial misfortune which might come your way.

A personal injury claim can help you get back the wages you have lost due to time off work.

Sometimes the problem is not even with shortage of income. The cold indifference of an employer following an accident can be enough to push an injured employee towards making a claim.

You will have to prove breach of duty on the part of your employer if you are going to have a claim against them.

Sometimes, clients – and even some employers – mistakenly think that employer’s liability insurance will pay out automatically because “that’s why we have it”.

At the other extreme, the employer may tell their employee that they’ll be wasting their time if they try to claim – which most employees will regard as a challenge to them to claim, after all.

“The biggest issue I have is that, when I spoke to one of the owners of the company I work for and said that they would be getting a letter from a solicitor, he told me there was no way he was allowing me to claim off their insurance.”

Another way employers show insensitivity is by giving the impression that the needs of their business rank above everything else – and showing no apparent interest in the welfare of the injured employee.

“My boss showed no compassion at all. There was no accident report; there was no nothing. While I was in hospital after my accident, he did not hold back in phoning my wife. She felt hounded for news about how soon I would be back to work. Once I did get back to work, it was just “business as normal”. There was no concession for me to work at my own speed, even though I had said I might not be able to work as fast.”

The perception that your injury was caused by gross negligence

To have the basis for a claim, you need someone else to have been negligent in causing your injury.

However, a perception of a high level of carelessness can make a difference as to how likely the injured person is to claim.

“The accident was a very frightening experience. The thing that really annoyed me about it was the fact that the bus driver took my concession card and he must have also seen that my arm was in a sling. Nevertheless, he just “shot off” after I had paid my fare. It was not my fault that he was running 10 minutes late. What if I had been a little child or a pregnant lady? If making a claim here helps prevent it happening to someone else then it will have been worthwhile. I never even got an apology from the bus company.”

And that links directly to the next kind of motivator …

Your desire to prevent a similar accident happening to someone else

One of the possible outcomes of a successful claim is that it will result in a review of practices and procedures, meaning that a recurrence of your accident circumstances is unlikely, or even impossible.

There is never any guarantee that that will be the case but it can be a strong motivating factor for making a claim.

“My main issue is that I want the safety side of things to change. I keep thinking that it could have been a child who was injured rather than me. I could have been more seriously injured or even killed, given the force of the impact.”

A solicitor you never meet face to face can still do a perfectly good job in dealing with your personal injury claim. We deal with some clients in that way, given that we cover the whole of the North of Scotland.

The benefit in having a solicitor you can meet with in person lies in the reassurance it can provide beyond printed or spoken words. You get a better feeling for how things are going when you can see the other person’s body language as well as hearing their words.

These are some of the comments we have received:

“Local is good. I would rather speak to somebody face-to-face and get to know somebody – put a name to the face. It’s nice to get to the point where you don’t have to send them an email. You don’t have to phone. You can actually go and physically speak to them. I have found it very helpful at times being able to nip into the office and get a chat with you for a few minutes. That has eased my mind a lot on a lot of different occasions. You see these advertisements on the TV for the various accident helplines but it seems to me there is no personal touch. Sometimes, when you are on the phone or in an email, you can’t get things across as clearly. By sitting down and chatting to the other person face-to-face, I find it’s easier and you remember things better. You are not so stressed.”

“I told my wife we would go online and see if there was anyone online who was local. You know, I wouldn’t want to go to one of those national helplines. If you go to a local company, at least you can come and speak to them, rather than doing things over the phone. After I got in touch with you and you emailed me, I thought: “That’s fine; at least they’re in Elgin. I can go and deal with them”.”

We are accredited specialist solicitors in Elgin and we would be glad to hear from you if you have any questions about this article or any aspect of our personal injury claims services.

All initial discussions are free of charge and without obligation to take things further.

Get in touch with us for a chat.