You are here: Home / Archives for Clinical Negligence

Below are listed all of our website articles relating to medical negligence claims. 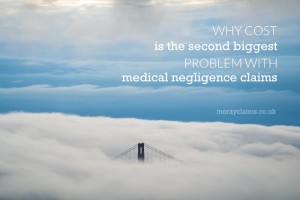 If you are above a certain age, you may remember the following scene. Seated at a table in a San Francisco diner, Inspector Harry Callahan’s first bite of a hotdog is interrupted by the ringing of an alarm in the street outside. Muttering an oath, Inspector Callahan wipes his mouth and heads out to investigate. Stepping onto the sidewalk, he draws and cocks his .44 Magnum revolver. Its cylinder has 6 chambers, each holding one bullet. He sees a car draw up outside the bank across the road and, almost simultaneously, a man backs out of the bank, wielding a shotgun which is pointed into the premises. A bank robbery is in its final stages. Callahan warns the man with the shotgun to “halt” but the robber’s response is to spin and fire in Callahan’s general direction. Callahan downs the robber with a single shot. There are two men in the front of the getaway car. A third runs out of the bank and dives headlong into the vehicle through the open rear passenger window. The car END_OF_DOCUMENT_TOKEN_TO_BE_REPLACED 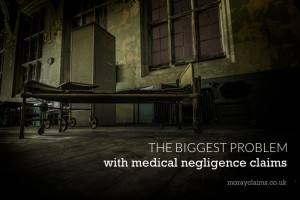 If you consult a solicitor about a possible personal injury claim, you will have a lot of questions. Common examples would be: How much is my claim likely to be worth? How long will it take? But the most important question of all is probably: do I have a claim at all? Lawyers will decide the answer to that on the basis of whether reasonable prospects of success exist. It usually boils down to whether your claim has a better than 50/50 chance of succeeding. So, if the most important question is "Do you think I have a claim?", your solicitor will be keen to reach a view on that issue as quickly as possible. In many situations, your solicitor can reach a provisional view on your prospects of success immediately. They can often give you advice on your chances, just on the initial information you give them. If you’ve been injured in a road traffic accident where another vehicle ran into the back of yours, it was probably their fault. You were on the main road END_OF_DOCUMENT_TOKEN_TO_BE_REPLACED

The Scottish Government is consulting on imposing a “duty of candour” for healthcare providers. In its response to the consultation, the Association of Personal Injury Lawyers (APIL), a not-for-profit organisation which campaigns for the rights of injured people, has emphasised the need for medical and social care staff to be forthcoming and open about medical mistakes. Marie Morrison and Peter Brash of Grigor & Young / Moray Claims are members of APIL and accredited as Senior Litigators by APIL. Grigor & Young’s Elgin Office has corporate accreditation from APIL. An apology would often be enough The experience of most solicitors who deal with claims for medical negligence is that the majority of people who are injured as a result of a medical blunder simply want a clear explanation of what went wrong and what happened. The injured person wants to know that any lessons which could have been learned from the experience have been learned and will be put into practice for the END_OF_DOCUMENT_TOKEN_TO_BE_REPLACED 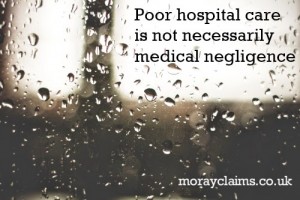 It’s always a worry if you have to have hospital treatment. You’ll be concerned about the procedure or operation, any anaesthetic and the recovery period. The practicalities of your stay in hospital will also be on your mind, such as sharing a ward with others and the quality of the food. You’re unlikely to think about the risk of being injured due to medical negligence during your stay because health service staff are dedicated professionals working hard to deliver the best possible care. Their jobs require them to deal with deadlines and to keep within strict budgets. Sometimes, they have to exercise judgement in making decisions, weighing up competing risks. And medical science is not an exact science. Unfortunately. things don't always work out for the best. You need to understand that, if things go wrong and outcome of your treatment is not as you would wish, just because you have experienced poor standards of care, that does not necessarily mean you have END_OF_DOCUMENT_TOKEN_TO_BE_REPLACED