You are here: Home / Road Safety / Do personal injury claims have any public benefit? 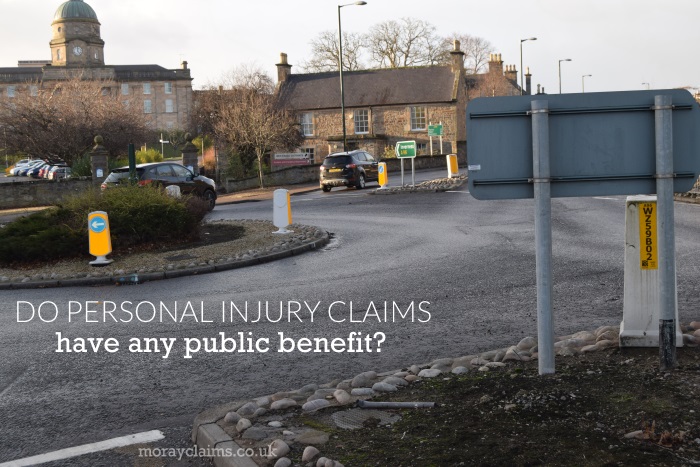 It’s a myth that there is a Compensation Culture.

But is it possible to show any real public benefit from personal injury compensation claims?

Moray Claims / Grigor & Young LLP operates at a fairly local level and, in this article, we will look at 4 examples of ways in which personal injury claims by individuals have resulted – or could result – in changes which are of public benefit.

A successful claim for a pedestrian who tripped on a raised piece of tarmac on the pedestrian footway close to the underpass at Alexandra Road, Elgin, resulted in the defect being repaired by Moray Council within a matter of days of the claim being intimated.

This raised area within Elgin bus station caused a pedestrian to trip and fall and suffer injury. It was never entirely clear why the plinth was there in the first place – possibly for an industrial bin.

A successful claim here resulted in proper marking of the plinth so that the trip risk was at least reduced, if not eliminated.

It was the obvious explanation for a serious accident at the roundabout which resulted in a successful personal injury claim.

The westbound driver entered the roundabout when it was not safe to do so, causing a collision.

On the face of it, the level of risk would be reduced for car drivers – probably extinguished – if the height of the road sign above the traffic island were to be altered.

We notified Transport Scotland about our concerns in relation to this issue. Of course, it had to be a matter of balancing the risk the sign would obscure a driver’s view against the need to provide clear signage at the roundabout.

Nevertheless, the poor signage location was just something extra for drivers to bear in mind if approaching the Dr Gray’s roundabout from the High Street A96 and intending to continue west on the A96 along West Road. It’s a manoeuvre that many Moray drivers undertake daily.

We’re pleased to report that the signage was changed. The sign was raised significantly and out of the line of sight of any driver wishing to enter the roundabout from the High Street A96.

In the late 1990s, the pedestrian bridge over the railway at Elgin railway station had a metal surface with raised sections, intended to provide slip resistance. Over time, these raised parts got worn away and, as a result, a pedestrian slipped and fell on the steps, near the top of the bridge on the south side, sustaining injury.

In the aftermath of that successful personal injury claim, the walking surface of the bridge was changed to a sandpaper-like substance. Later still, the bridge was completely replaced and the new facilities included a lift.

All of which can possibly be traced back to the accident in question (or not).

We hope you can see from the above examples that personal injury claims do have a public benefit in terms of improving safety for the future.

In our view, this is why it is important that everyone should report accidents they suffer, even if they have no intention of making a personal injury compensation claim.

In the same vein, if you see a defect in a public place such as a roadway or pavement, you should report the defect to the appropriate authority. In Moray, while that may be the owner of the particular premises, the relevant authority would usually be the Moray Council.

They have a facility for reporting road and footpath defects on their website. If it is a trunk road which is affected, the report should be made to Transport Scotland.

If the appropriate people do not know about hazards or accidents, they cannot investigate them and there is no chance of safety improvements happening.

We hope you have found the information in this article to be helpful. If you have any questions about the content of this article or about the wider personal injury claims handling services provided by Moray Claims / Grigor & Young LLP, please do not hesitate to contact us.

All initial enquiries are at no charge and without obligation to proceed further. You can contact us on 01343 544077 or you can send us a Free Online Enquiry.