You are here: Home / Negligence / Donoghue –v- Stevenson: the world’s modern law of negligence is born in Scotland 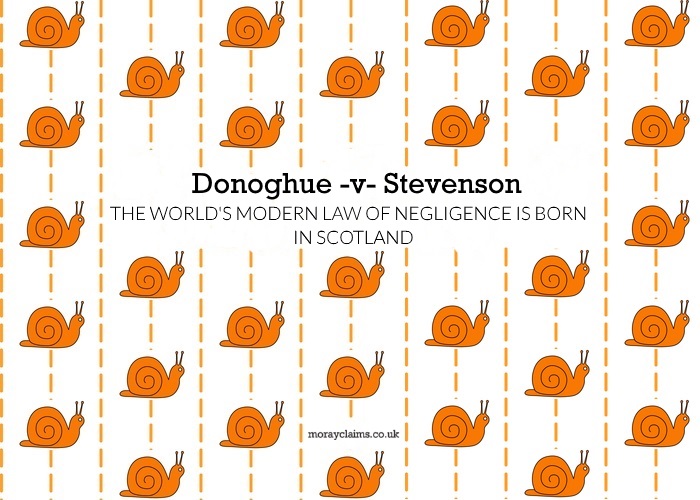 If you have an accident claim in Scotland, it is covered by the Law of Delict.

In England, it is known as the Law of Torts.

The modern law of Delict – covering the duties people owe to others not to cause them injury – can be traced to a particular case, arising from an incident which occurred in Paisley on Sunday, 26 August 1928.

The case of Donoghue –v- Stevenson is widely known in legal circles, not just in Scotland and the UK but throughout the world, as the source of the modern law of negligence.

A night out in Paisley

On the evening in question, May Donoghue, at that time a 30-year-old shop assistant, boarded a tram in Glasgow for the thirty-minute journey to Paisley.

At around 8.50pm, she and a female friend took their seats in the Wellmeadow Café in Paisley’s Wellmeadow Place.

The café owner, Francis Minchella, took the order and May’s friend ordered, and paid for, a pear and ice, and an ice-cream ‘float’.

Mr Minchella brought the order and poured part of the contents of a bottle of ginger beer into a glass, containing ice cream for May.

She drank some of her ‘float’ and her friend then began to pour the remainder of the ginger beer into the glass.

It was claimed that the remains of a decomposing snail fell out of the bottle into the glass at this point.

May later complained of stomach pain, and her doctor diagnosed her as suffering from gastroenteritis, and being in a state of severe shock.

The legal problems affecting the claim

In those days, it was only in specific and limited circumstances that the law supported the existence of a ‘duty of care’ to people harmed by the negligent acts of others. For example, this was the case where a contract existed between the parties or where a manufacturer was acting fraudulently or making something dangerous.

As the law stood at that time, May Donoghue had no basis for legal action over her snail. As May’s unnamed friend had paid for the drink, it meant there was no contract between May and the café owner.

May’s claim was taken on by a solicitor called Walter Leechman, even though his previous experience of this type of scenario could hardly be said to be encouraging for him or for May.

He had already brought two cases against another drinks manufacturer, AG Barr, alleging a dead mouse had been found in a bottle of their ginger beer. Leechman had lost both cases, in 1929.

In the circumstances, it is unlikely that there would have been many solicitors willing to run the case.

Nevertheless, Walter Leechman went ahead and raised an action in the Court of Session against David Stevenson, the manufacturer of the ginger beer.

The claim failed in the Court of Session.

The judges took the view that there was no difference in legal effect between a mouse in a bottle and a snail in a bottle. So, in order to continue with her claim, May Donoghue would have to appeal to the highest Court in the land, the House of Lords (nowadays, the Supreme Court).

Walter Leechman had to do the work for no fee and he had to find advocates prepared to do the same. May Donoghue had to be given “pauper” status.

The claim in the House of Lords

In the House of Lords, it was argued on May’s behalf that a manufacturer is liable for any damage caused if it puts a product on the market in a form that does not allow the consumer to examine it before using it. Remember that May could not have examined her ginger beer before drinking it because the bottle was dark and opaque.

A panel of five judges heard the appeal. One of them was Lord Atkin of Aberdovey.

On 26 May 1932, he gave the leading judgement in the case, finding in favour of May Donoghue (allowing a Proof (‘trial’)). The panel of Judges had divided overall 3-2 in May’s favour. The other two judges forming part of the majority were both Scottish judges – Lords MacMillan and Thankerton.

Lord Atkin based his judgement on the Christian principle of ‘loving thy neighbour’, and the parable of the Good Samaritan (Luke 10: 25 – 37).

And with those words came the birth of the modern law of negligence.

Lord Atkin’s test could now be applied to almost any relationship, in any circumstances.

Negligence was defined as something which you can reasonably foresee will injure someone else and who is likely to be affected by your actions or lack of actions.

And what of the outcome of the case?

David Stevenson died within a year of the House of Lords’ judgement and his executors negotiated a settlement of the claim.

Over the last 80 years or so, Lord Atkin’s test has been refined by decisions in a number of subsequent cases. During that time, the categories of case where negligence claims can succeed have generally become well-known and understood, though the categories are ‘never closed’.

If you have any questions about this article, or about the possibility of making a claim for personal injury resulting from the negligence of another, get in touch with us.