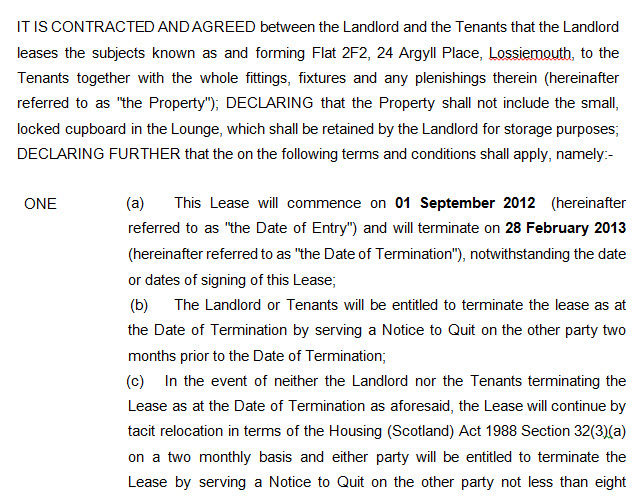 [EDITOR’S NOTE: Please note that the article which follows is still relevant in terms of the way the value of claims under the Tenancy Deposit regime are calculated. However, how such claims are to be made in Scotland has changed  from 01 December 2017, with the removal of most private domestic tenancy issues (i.e. tenancies without a local authority or social landlord) from the jurisdiction of the Sheriff Court. Instead, these are now under the supervision of the First-tier Tribunal for Scotland (Housing and Property Chamber). This change means that it is not going to be financially viable in most cases to employ the services of a solicitor to make such claims. You can find further information on the mygov.scot website).

If you own a house or flat in Scotland which you have let to tenants then you need to be aware of recent regulations which could put you at risk of financial penalties if you have not dealt properly with any deposit you have received from the tenants.

The Tenancy Deposit Schemes (Scotland) Regulations 2011 were introduced to try to provide a solution to a long-standing problem.

Landlords refusing to repay tenants their deposit at the end of their period of occupation is a common situation. It was the Scottish Government’s perception that the reasons for withholding payment were often spurious. The sums of money involved – typically around £500 – were such that it was difficult for tenants to force repayment in appropriate cases.

It was necessary to raise a Small Claim action in the Sheriff Court. It is not economical to instruct a solicitor for such work, given the restrictions on recoverable costs / expenses. For many tenants, the time and hassle involved in a Small Claim were too much of a deterrent. Landlords were too often getting away with an abuse of the system.

The Solution: Now Necessary for Landlords to Lodge Deposits with a Third Party

The regulations set up a system whereby the majority of tenancy deposits must be paid into an approved scheme – of which there are three – by the landlord.

There was a phasing-in period from 07 March 2011 and the regulations have had universal application with effect from 15 May 2013.

In addition to the obligation to place the deposit with an approved scheme, the landlord is obliged to tell the tenant it has been done and give information about it.

The landlord will be in breach of the regulations if there is a failure either to place the deposit with a scheme and / or give the tenant the required information.

Penalties for Landlords Failing to Deal Properly with Deposits

The penalties for failure to comply with the regulations are potentially significant.

The tenant can raise a court action and claim an award of compensation totalling up to three times the amount of the deposit.

Any such action has to be raised no later than three months from the date of termination of the tenancy. The form of action prescribed is by way of Summary Application – which is a much more favourable format in terms of recoverable costs than the pre-existing “small claim” regime referred to above. In short, it is financially viable for tenants to instruct a solicitor to handle such compensation claims on their behalf.

The court has a discretion about how much to award up the maximum “deposit x3”. However, the regulations appear to require that at least some compensation must be awarded. So the court could award anything from £1 upwards and it remains to be seen what attitude the courts will adopt. A lack of good faith on the part of the landlord, especially where it appears in addition that repayment of the deposit has been withheld on spurious grounds, might well indicate an award towards the higher end of the scale.

We already have experience of a landlord’s breach of the regulations being used as a means for a tenant to negotiate a better financial deal on termination of their lease than they might otherwise have done. Summary Applications under the regulations are also starting to appear in Elgin Sheriff Court.

(Subject to what is contained in the Editor’s Note at the top of this article…)  If you require advice in connection with issues surrounding tenancy deposit claims  – whether you are a landlord or a tenant – get in touch. We are happy to have an initial chat with you, which is free and without obligation. Peter Brash can be contacted via peter@grigor-young.co.uk or on 01343 564813. Or complete an online enquiry by clicking HERE.