You are here: Home / Archives for Personal Injuries Lawyer

The Scottish Government is consulting on imposing a “duty of candour” for healthcare providers. In its response to the consultation, the Association of Personal Injury Lawyers (APIL), a not-for-profit organisation which campaigns for the rights of injured people, has emphasised the need for medical and social care staff to be forthcoming and open about medical mistakes. Marie Morrison and Peter Brash of Grigor & Young / Moray Claims are members of APIL and accredited as Senior Litigators by APIL. Grigor & Young’s Elgin Office has corporate accreditation from APIL. An apology would often be enough The experience of most solicitors who deal with claims for medical negligence is that the majority of people who are injured as a result of a medical blunder simply want a clear explanation of what went wrong and what happened. The injured person wants to know that any lessons which could have been learned from the experience have been learned and will be put into practice for the END_OF_DOCUMENT_TOKEN_TO_BE_REPLACED 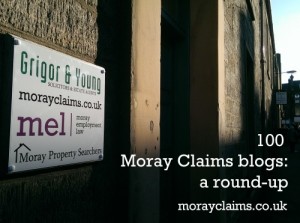 We launched the Moray Claims website in October 2012. This is the 100th blog article. So, as we reach the milestone of 100 Moray Claims blogs, what are the main themes which have evolved via the blog during the last 2 years? They ask, You answer I’ve looked to the “They ask, You answer” advice of Marcus Sheridan for guidance, even if most of the time it’s meant predicting rather than knowing what you might want to know about personal injury law. Moray Claims is a trading name of Grigor & Young and so we started off this blog describing Moray Claims  as “Not just another accident claims company”. Probably a bit too cryptic as a headline. Belatedly, months later, I realised it might be a good idea to explain what is Moray Claims and the purpose of the blog. In the buzz-speak of the content marketing gurus online, I’ve tried to provide meaningful content, to a targeted audience (you folks in Moray and a bit beyond that) and be authentically helpful. Helping you in Moray to claim END_OF_DOCUMENT_TOKEN_TO_BE_REPLACED 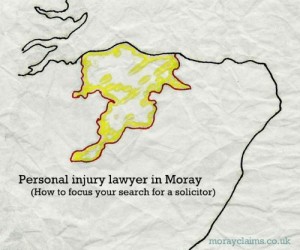 If you live in Moray or have been injured in an accident which happened in Moray, here are some factors to consider if you need to choose a solicitor to help you with a personal injury claim. Are you going to use a local solicitor or one who is at a distance from you? A Moray solicitor will have local knowledge, which could be useful and give them an advantage over someone who is not based in the area. For some types of accident - for example, pavement tripping accidents - it can be crucial for someone (often, the solicitor!) to visit the locus of the accident as soon as possible after the accident in order to take photographs and make measurements. A local solicitor is going to be better-placed to carry out such work. Or maybe not. Google Streetview and other free online tools mean that a virtual visit to a locus is often possible and this may be sufficient, depending upon the type of accident. So, it may not be essential to have a local solicitor to deal with your END_OF_DOCUMENT_TOKEN_TO_BE_REPLACED 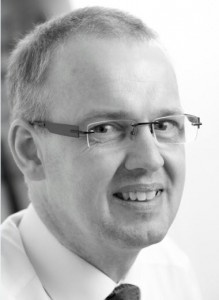 Hello. My name is Peter Brash. What’s my line? I work in Elgin, Moray. That’s approximately half way between Aberdeen and Inverness in the beautiful North East of Scotland beside the shimmering Moray Firth. I’m head of the Personal Injury Department at Grigor & Young, Solicitors. Moray Claims is a trading name of Grigor & Young. We also have an office in Forres. Together with my solicitor colleague, Marie Morrison, we have over 40 years’ experience in dealing with personal injury claims for injured people in a wide range of circumstances. I am accredited by the Law Society of Scotland as a Specialist in Personal Injury Law. My colleague, Marie Morrison, and I are both members of the Association of Personal Injury Lawyers (APIL) and Accredited by APIL as Senior Litigators. The Elgin branch of Grigor & Young has corporate accreditation from APIL. So what is Moray Claims blog about? In posting to this blog, I’m airing informal opinions about legal matters – generally END_OF_DOCUMENT_TOKEN_TO_BE_REPLACED