You are here: Home / Road Traffic Accidents / If you travel with a drunk driver and get injured 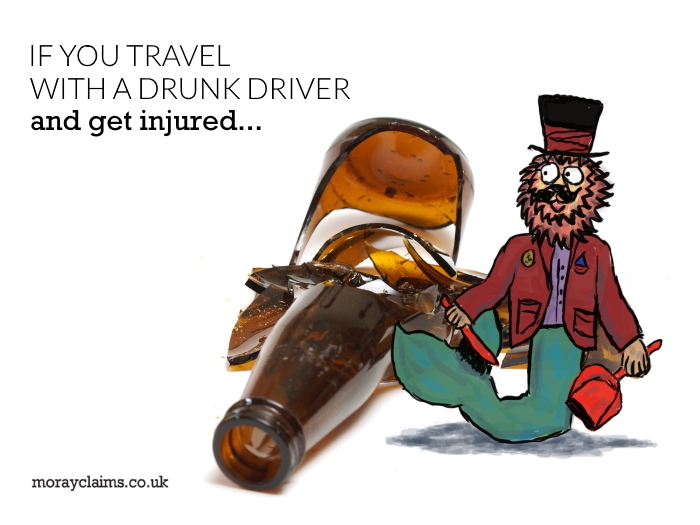 If you travel with a drunk driver and get injured due to their bad driving, does that mean you can’t claim?

A September 2019 poll commissioned by Glasgow-based solicitors, Dallas MacMillan, indicated that two-thirds of those polled believed that if you agree to be a passenger in a car driven by someone you know is under the influence of alcohol, you won’t be able to claim compensation from the driver if they crash the car and you’re injured.

This 66% (or so) majority are mistaken in their understanding of the law.

People injured in such circumstances can claim successfully – and you may be surprised by how fully they can claim.

We agree that travelling with a driver who is under the influence is a very bad idea. On the other hand, you should not lose sight of the fact that passengers in vehicles very rarely have no compensation claim available to them if they are injured in an accident.

In this article, we’ll look at the law on accidents involving passengers in vehicles driven by drunk drivers.

As we often do in our articles, we will split our discussion into 3 sections. We’ll start by considering a Scottish case and an English case that provide a basic explanation of how the law works in this area. Secondly, we’ll look at why the law takes the view that it does in this type of case. Finally, we’ll move on to an extreme example that will help you understand just how much leeway is given to passengers in vehicles driven by drunk drivers.

Let’s start by looking at two cases which are very similar on their facts.

The first accident happened on 30 June 1978, near Danderhall, Midlothian.

At a bend in the road, the driver lost control of the car and it collided with a lamp post. The accident was caused by the driver’s negligence.

The claimant was a passenger in that car. It was driven by a driver who the passenger knew to be over the drink drive limit. They had been drinking together in pubs in Rose Street, Edinburgh, all that evening. The driver’s blood alcohol level was found to be 142 milligrammes of alcohol per 100 millimetres of blood (at that time, the legal limit was 80 milligrammes – since 2014, it has been 50).

The passenger was not wearing his seatbelt. The court decided that his injuries would probably have been less severe if he had been wearing a seatbelt.

But, as the court pointed out, the Road Traffic Act (then and now) had a provision which meant the court was not allowed to eliminate the injured person’s claim because he had, by his conduct, agreed to run the risk of the driver’s negligence.

However, the passenger did not receive full compensation for his losses.

By reason of contributory negligence his compensation was reduced by 50%. He received only half the assessed value of his claim.

The contributory negligence was for 2 reasons:

We have discussed failure to wear a seatbelt in other articles on this website. The judges in the Winnik case did not break down the 50% to explain how they reached that percentage.

The law on failing to wear a seatbelt has been settled since the 1970s.

The passenger in Winnik probably would have suffered some injury even if he had been wearing his seatbelt. Assuming he got a 15% deduction for that, his getting in a car with a drunk driver on its own seems to have lost him another 35% of the value of his claim.

As we will go on to discuss the 35% element (if that’s correct), could be argued to be too high. But the point here is that injured passengers in vehicles driven by drunk drivers – where the accident was the fault of the drunk driver – can still claim successfully. Indeed, they will get more than 50% of the value of their claims in most cases.

The parties had visited various pubs together and estimates put their alcohol consumption at about 9 pints each. As they drove home, the driver lost control of the car and it struck a lamp post.

The 20% deduction from the passenger’s compensation was entirely due to the fact that he got in the vehicle with a driver who he knew to be over the limit.

You might think the deductions for contributory negligence for getting in a car with a drunk driver were quite small (35% and 20%). You’d think that knowingly travelling with a drunk driver should convert to a lot of blame on the part of the injured passenger.

Let’s move on from our initial look at the law in this area and – in section 2 – take in some of the policy considerations that apply.

Why does the law take this approach to contributory negligence in drink-drive-passenger cases?

The law requires courts to look at 2 things when considering contributory negligence.

In this sort of case, they’re comparing the conduct of the driver and the passenger against each other.

On the first point – the blameworthiness of each person – it’s arguable that it’s balanced on each side. Both of the vehicle occupants had consumed a lot of alcohol and probably knew that the journey was not one they should be making while in that condition – and not just for their own safety.

On the second point (causative potency), however, it’s more lopsided. The driver was in control of a heavy and potentially lethal object; the passenger was just sitting there, dependent on the driver’s ability to keep the car on the road. But failing to wear a seatbelt could count against the injured passenger, provided it probably made a difference to the severity of the injuries suffered.

Taking these 2 factors together, you generally end up with a position where the drunk driver bears the greater share of the blame.

Let’s now move on to a final example where a further ingredient in the facts adds a complication which should help with our overall understanding.

Does it make a difference if you are travelling in the boot of the vehicle?

In the English case of Gleeson -v- Court (2007), the car was overloaded with passengers. There were 6 people in it.

The injured passenger was travelling in the boot and he knew the driver was drunk.

When the driver lost control and crashed, the claimant sustained serious injuries.

The court took an “Owens -v- Brimmell” deduction of 20% as the starting point. We had a passenger who was travelling with a driver who he knew to be adversely affected by alcohol.

Next, on the face of it, 15% should come off for failing to wear a seatbelt in circumstances where it would have made a big difference to the severity of the injuries.

The judge decided that it was not fair to aggregate the percentages. That would lead to an element of double counting. As discussed in section two of this article, above, the outcome had to leave the driver with the bulk of the legal responsibility. Hence, the result was a 70/30 finding in favour of the injured passenger.

Travelling as a passenger in a vehicle driven by someone you know to be over the drink driving limit will not prevent you having a claim, if the vehicle crashes due to the driver’s fault and you are injured.

You will almost certainly be able to claim more than 50% of the value of your claim and probably up to 80% of its value.

This is a very long way from the apparently widespread perception among the public that if you are a passenger knowingly driven by a drunk driver, you won’t have any claim for compensation if you get injured due to the driver’s negligence. It’s not correct to say that you can’t claim.

It’s understandable that, in this type of scenario, the injured person might worry about whether, morally, they ought to be entitled to compensation. But what might be “morally” correct is not always the law, of course, and, as we have discussed, moral blameworthiness is only part of the calculation – causative potency also has to be taken into account.

Arguably, it illustrates the fundamental point that you should never assume that you know correctly how the law will apply to a particular situation. It is always a good idea to get advice from a specialist solicitor as soon as possible, especially when, in the area of personal injury accidents, you will be able to get reliable advice free of charge.

If you travel with a drunk driver and get injured, you still have a potential claim for compensation.

Should you have any questions about anything mentioned in this article or about any aspect of our personal injury claims services generally, please get in touch with us. All initial enquiries are free of charge and without obligation to take matters further with us.

You can contact us by phoning on 01343 544077 or you can send us a Free Online Enquiry with a view to getting a free case assessment.

The page on this website which deals with road traffic / car accidents is here.