You are here: Home / Contributory Negligence / Why a cyclist’s fault for an accidental injury can have drastic financial consequences 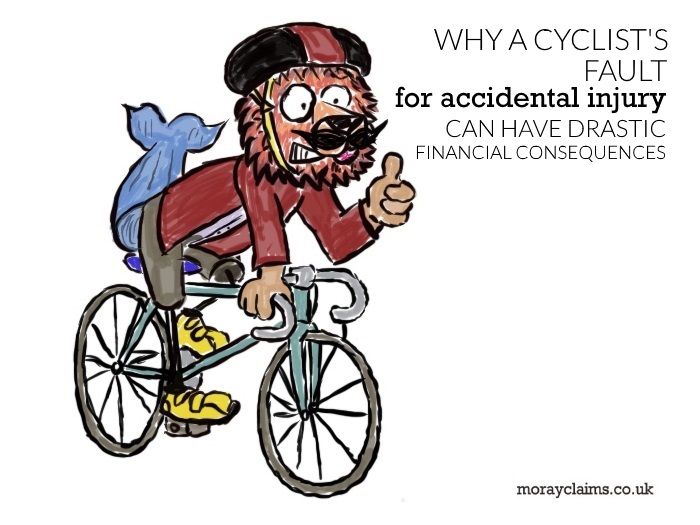 Ned Ryerson must be one of the most beloved “annoying” characters in film history.

He is the insurance salesman from Phil Connors’ past who keeps turning up to bug Phil.

He appears at the same point on Phil’s walk from his Punxsutawney guesthouse to Gobbler’s Knob, as Groundhog Day repeats over and over again.

It’s one of my all-time favourite films – one which includes a happy ending for Ned, as he explains:

“I have not seen this guy for 20 years but he comes up to me and then he buys whole life, term, uniflex, fire, theft, auto, dental, health – with the optional death and dismemberment plan – water damage… Phil, this is the best day of my life!”

Robert Hazeldean faced bankruptcy over a £100,000 court costs bill arising out of road accident where he was held responsible for the injuries of a pedestrian.

We’re viewing this from the perspective of Scottish solicitors but there are a number of lessons we can take from Mr Hazeldean’s experience, which are particularly applicable to cyclists.

Here are the facts of the case.

On 20 July 2015, Gemma Brushett was crossing the street at lights at London Bridge. She was looking at her phone. The lights were green for traffic. Mr Hazeldean was approaching, travelling at about 15mph. He sounded his horn but was unable to avoid a collision with the pedestrian. Both of them were knocked out by the collision and each suffered physical injuries.

Ms Brushett made a claim for compensation against Mr Hazeldean and it seems that he did not initially get legal advice about his rights.

When the case reached the stage of a court hearing at Central London’s County Court, the judge found that each party was equally to blame for the accident. In other words, liability was split 50/50. Ms Brushett was entitled to compensation amounting to 50% of the full value of her claim – an amount reported as £4,161.

She was also entitled to court costs (or, expenses, as we call them in Scotland) and those were estimated at in excess of £100,000.

In this article, we will look at 3 aspects of this case we can learn something from.

Firstly, we will consider the fact that people on bicycles can be held to be at fault for accidents. Secondly, we will examine the general insurance position of road users on bicycles. Finally, we will look at the financial implications of this scenario for the cyclist and how it may sometimes be prudent to make claim for personal injury compensation even if it goes against your principles.

1. Pedal cyclists can be to blame for accidents.

As solicitors, we are much more used to representing injured cyclists in their claims against car and other vehicle drivers. However, a cyclist travelling at speed represents a possible danger to pedestrians, as this accident illustrates.

In finding each side equally to blame for the accident, the court will have weighed up a number of factors.

On the one hand, the pedestrian was not paying proper attention and crossing against the lights.

On the other hand, the cyclist was travelling at a much higher speed than the pedestrian and inattentive jay-walking behaviour from pedestrians in a busy urban street was readily foreseeable. According to the judge: “Cyclists must be prepared at all times for people to behave in unexpected ways.”

2. Cyclists do not require to have insurance but insurance might be a good idea.

If you drive a motor car on the road and don’t have insurance, you will be committing a criminal offence.

Pedal cyclists don’t have to have insurance.

Had Mr Hazeldean had some form of insurance, it might have saved him a lot of money. It’s possible he may have had some sort of personal liability insurance or legal expenses insurance through his house contents or buildings insurance. Or he could probably have taken out specific personal liability insurance relative to the use of his bicycle – insurance that would have paid for legal advice and met any compensation he was found liable to pay in the event he negligently caused an accident, as here.

As it was, as Mr Hazeldean discovered, if you’re to blame for an accident and you’re not insured, it could cost you a crippling amount of money.

3. You may not like the “claims culture” but you sometimes have to make a claim “in self-defence”.

We don’t accept there is a Compensation Culture.

Whatever the case, as in Mr Hazeldean’s case, the compensation element of a claim can be dwarfed by the costs associated with court action if a claim (here, Ms Brushett’s) has to go to court in order to succeed.

Ms Brushett and Mr Hazeldean were equally to blame for the accident. Mr Hazeldean was injured in the accident too (he was left with permanent scarring). Unfortunately for him, he did not counterclaim for compensation for his injuries and losses. By the time of the court hearing, he would have lost the right to introduce a claim of his own because of the 3-year limitation period for most personal injury claims.

Also, applying Scots Law logic to the issue of costs, just because the parties were held to be “equally to blame”, that did not prevent Ms Brushett from being treated as totally successful in her claim. She had presumably needed to raise court action to vindicate her right to get any compensation at all. She was therefore justified in raising the action and entitled to her costs.

Had Mr Hazeldean been able to make a counterclaim for his own losses, he would have been able to off-set them against his opponent’s losses. In addition, the court may well have varied the costs order – perhaps finding each side responsible for their own costs because they were equally to blame for the accident.

This could have made a significant (beneficial) difference to the overall financial outcome for Mr Hazeldean.

As Mr Hazeldean commented upon the outcome: “I feel that most cyclists would not have appreciated the consequences of not taking the opportunity to put forward a counterclaim which meant that I was unable to rely on the legislation in the same way that the claimant has to protect myself against a destructive costs award.”

“This was not because I was not injured, but because I do not advocate the claim culture. Had I had legal representation at the time of preparing my defence, I would have taken those steps to protect myself.”

In most situations where a cyclist is injured in a road traffic accident, the cyclist will be the person making the claim for personal injury compensation. However, it is important to keep in mind that a cyclist could be the person blamed (or partly to blame), especially if the other party to the accident is a pedestrian.

“Motor insurance” is not compulsory for cyclists but it might be sensible to review whether some form of personal liability insurance would be a good idea, just in case. You may already have this as an add-on to other insurance, such as home insurance. (“Bing!”, as Ned Ryerson might say).

Just because an accident was not wholly your fault and there is a finding of contributory negligence against the other party, that won’t necessarily protect you against a significant liability for costs / expenses if the other party successfully proves they are entitled to compensation.

It is always a good idea to get legal advice in these situations as quickly as possible. The rules on time bar and limitation of claims mean that, by the time you realise you should be counterclaiming for your own losses, you may be too late to do so.

We hope you have found this article – about why a cyclist’s fault for an accidental injury can have drastic financial consequences – to be interesting and useful.

If you have any questions as a result of the content above, please do contact us and ask for clarification. The point of this website is to generate information and become a sort of Wikipedia in this field. Your questions help us to provide answers which will expand and improve the content on Moray Claims – for everyone’s benefit, we hope.

You can get in touch with us by sending a Free Online Enquiry or by phoning us on 01343 544077. All initial enquiries are free of charge and without obligation. The same applies to any enquiries you might have about our personal injury claims services, generally.

If you are looking for material related to this article – concerning cycling accidents – please see the following articles on this website: